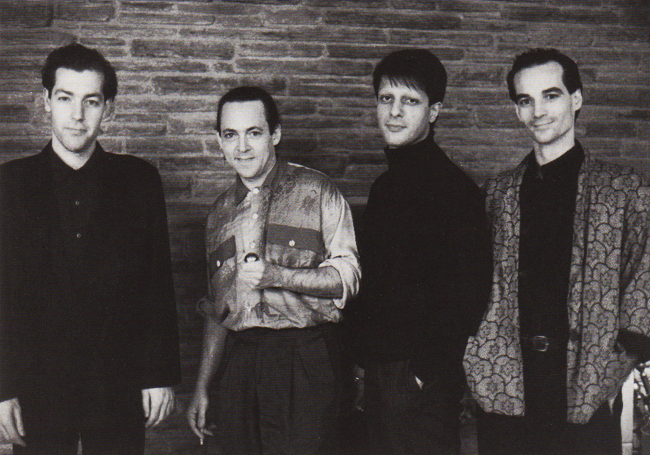 Bewildered stares greeted Lonely Universe during a recent performance at Ottawa's National Gallery. Playing to a lunchtime crowd comprised mainly of senior citizens and civil servants chowing down on brown-bagged delights, the trio's eclectic jazz explorations seemed out of place, to say the least.

One can only ponder the wisdom of booking a minimalist jazz act for a concert series that usually features groups performing standards and show tunes. But the circumstances allowed the group to live up to its name. It was indeed a lonely universe for the musicians as only eight people out of a crowd of several dozen clapped enthusiastically following each piece.

Despite the muted response, the band pulled off an impressive gig. The combination of Michael White's modulated, processed trumpet and drummer Michel Lambert's rattling chains and clanging trash can lids was entertaining for those with open ears. Between sets, White spoke to Innerviews about about the group's new CMP album featuring David Torn and Mick Karn, as well as the challenges of playing to the uninitiated.

Lonely Universe is performing to a lot of audiences on this tour that have no prior knowledge of its music. Is it working out?

Yeah. We opened for the Yellowjackets in Vancouver which I thought was a very strange idea. But the first 20 rows of people were right into it the whole way through. One woman who only knew the Yellowjackets came to our concert the next day with her kids. She wanted her kids to hear us play. We've had some nice surprises that way. I think people identify with the melody aspect of it first. Then, if they feel comfortable with that, they can start listening to the rhythmic aspect which is probably a bit more complex than it first appears. We play odd meters and we improvise odd meters, so there's a lot of interest in the rhythmic department that people can respond to. But it's not really the first thing that draws them into the music. People don't necessarily always listen to this type of stuff.

What do you make of the smooth jazz element the Yellowjackets represent?

I think it's the popularization of things that's disturbing to me—people changing their sound to become popular. I don't know if those guys really like the sort of music they're playing these days. But if that's the music they feel like playing, I say "great." But the only problem I have with those players is that they may think "Maybe if I play a little more like this, I could get more recognition." And I really think that's a mistake. I'd do something else first. 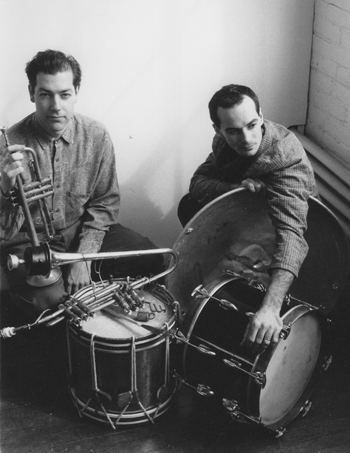 Mick Karn and David Torn play large roles on the new album. How did that collaboration evolve?

Kurt Renker, who is the owner of CMP, heard me play with Torn in L.A. and I guess he enjoyed it. He asked me to send him a tape of the things I do. I had been playing with Michel Lambert for a couple of years as a duo with just trumpet and drums. So, I sent that and he said "That's great, I really want to get Torn on my label but he's stuck in all these other contracts with ECM and Windham Hill. What would you think of the idea of having Torn and Karn, and you and Michel do an album?" And Michel and I both said "Well, I don't know. We really like these guys, but we don't really know if they can play our music." We didn't say that to Kurt of course. Rather, we said "Sure, let's do it." But we had some apprehension at first. I mean they're fine, fantastic musicians and the playing wasn't the problem. Sure, they could play the tunes. The question was whether they could get the idea of the tunes. And it turned out fantastically. They just connected to the mood and were right into it. It was a great experience.

How did you end up replacing Mark Isham on Torn's Cloud About Mercury tour?

Mark Isham at that time was on tour with Joni Mitchell and he couldn't do the gig. It was that simple—he had another commitment. He has a lot of different things going all the time. He does a lot of film scoring and a lot of work for other people, so he's always very busy. He comes a bit more from the blues or R&B side than me, but we both have that clarion, orchestral trumpet sound.

What was it like to work with producer Walter Quintus on the new album?

The album's really studio-oriented. The idea was to make a studio album with a lot of tracks and a lot of overdubbing. It took three weeks to make at Ztudio Zerkall in Germany. It's a very nice place. It's in an old valley and there's really nothing else to do, so we just worked on the album every day for three weeks. It was a lot of hard work, but it was really quite rewarding. Walter's domineering factor is found in the mixes he likes to get. It's his mix. Then, you have to convince him about your ideas. He may accept them and take them into account. So, he'll do all the mixes by himself and they would be a perfectly good record, but at the time you'll feel very uncomfortable about it. It's "Oh, this guy's just mixed my whole life away." So, you've got to go back into the room and say "Well, we've got to change this and that" and then he changes it a bit, but he'll show you why he thinks his ideas are better. Then a year or so later, you listen to it again and think "Well, he really found some interesting parts of my composition or my playing that I just didn't really hear before." He has a very amazing ear.

Fill me in on your musical history and background.

I'm 32 now and I was born in Vancouver. My brother plays saxophone and we had some bands when we were kids. Then I decided that I wanted to go to Toronto because it wasn't working terribly well in Vancouver. So, I went and I studied at the University of Toronto's music department. I got my BA and then started freelancing with contemporary music groups such as Array Music. I've done a bit of composition with them. I also used to play with Bruce Cockburn. I'm on his album World of Wonders and played on a couple of cuts on the compilation that came out after that. And I've played with Hugh Marsh on Shaking the Pumpkin. Along with Michel and I, Lonely Universe now includes Reg Schwager on guitar, who is a good friend of ours. I've known him since 1979 and Michel is actually married to his sister, so their life is part of it too.

The new album is available across the U.S. and Europe, but not in Canada. How does that make you feel?

It's pretty tough, but the problem is the label's small and the distribution is a joke. I could care less. People aren't really going to play it on radio enough so that there's going to be demand for it. The music distribution situation is so big business-oriented that independent people who try to do something different really have a hard time. Thankfully, I don't struggle because I play a lot of contemporary music outside of Lonely Universe and it's constant enough to pay the mortgage. It keeps you going.