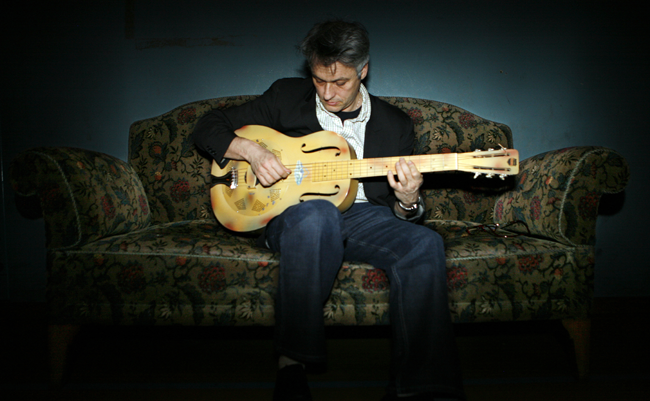 Marc Ribot's thirst for new musical possibilities has been the governing factor throughout his remarkable 30-year career. His 18 albums straddle myriad genres, including jazz, rock, punk, avant-garde, noise, new music, and worldbeat. His chameleon-like flexibility is a key reason why major artists such as Elvis Costello, Marianne Faithfull, Tom Waits, Robert Plant, and Alison Krauss have also knocked on his door for contributions to their records.

Ribot's latest CD, Party Intellectuals, recorded with his power trio Ceramic Dog, is a high-octane effort tinged with influences from across his career. Featuring bassist Shahzad Ismaily and drummer Ches Smith, the New York City-based guitarist originally had a more straightforward intention for the group.

"I've had other bands like Rootless Cosmopolitans and Shrek, which were new music bands, and Los Cubanos Postizos, which was a punk-Cuban ensemble, and in each case rock leaked into them," explains Ribot. "I thought 'Why not just create a rock band without it being filtered through another form?' Of course, other influences did leak in. One of the key differences from my other groups is I wanted to find the right players and form a band that had ongoing rehearsals and stayed together as a unit. That's in contrast to the usual New York thing where you write charts, have one or two rehearsals, do the gig, then don't do anything until the next gig. So, this was both a musical and a social departure for me."

The album's 12 tracks include riotous, epic instrumentals such as "Midost" and "Digital Handshake," the avant-pop-driven "Todo El Mundo Es Kitsch," the Latin-music tinged "For Malena," and an incendiary version of the Doors' "Break on Through." The diverse material came together in a couple of ways.

"We wrote, played, forgot, rewrote, replayed, and rearranged an unbelievable number of tunes," says Ribot. "Those were the ones that were more or less ready when we went into the studio. The others were things we came up with in the couple of rehearsals before the sessions. I don't believe in getting things perfect before you record them. The more things are created in the studio, the better the record. It's a question of what sounds good in the room at that moment. My biggest obstacle when I write is finishing pieces. The composer Anthony Coleman has a prayer that goes 'Dear God, don't give me any new ideas.' Letting one idea play out, finishing it, writing it down, and bringing it home requires serious discipline."

"The Stratotone's neck extends through the body, which gives it a much tighter connection and makes it more resonant," says Ribot. "The neck is also V-shaped with a short scale, which I like because my hands aren't that big. It enables me to play more notes and it's easier to sound like I know what I'm doing. In addition, it has a single pickup that's very bass-oriented. Frequently, I combine it with a wah pedal on a treble setting. It makes it sound like you're playing through a very cheap preamp, and I like that cheapness. It degrades the sound in a way that makes me sound like I'm playing on a 1950s record."

Ribot's fondness for the Telecaster is rooted in the basics and its historic lineage.

"I dig Telecasters for the same reasons everyone else does—they record beautifully, and also because they have certain resonances I like," says Ribot. "I think guitars are purely social creations. Telecasters were laughed at when they came out because when played acoustically, the sound is nothing. They wound up being on the records of people who could only afford a cheap guitar. The sound was given meaning by people like Cornell Dupree and James Burton. Bruce Springsteen and Keith Richards played Telecasters, too. They could have afforded fatter-sounding guitars, but they chose Teles because they made them sound like R&B players. That's what gives the Telecaster its power." 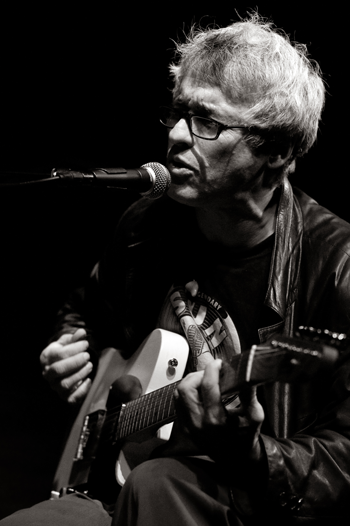 "I always try to isolate every effect with a bypass switch, so if I'm using one effect, the signal is only going through that one effect and no others," says Ribot. "I only got hip to this in the last two years. For years, I sounded like crap because I didn't understand that even when they're off, effects pedals mess up the sound. This is also really important because nothing sounds as good as the guitar plugged directly into the amp, which is something I do frequently. A true bypass switch lets the pure signal get through."

"I started out playing classical guitar, but was never really that serious about it," says Ribot. "My parents figured if I wanted to play guitar, I should take lessons with a friend of the family, even though I was mostly interested in garage rock. It turns out that particular teacher was Franz Cassius, whose music I recorded much later. There was a complete division between classical guitar and the rest of my musical life, but these days I play it daily. I was never able to figure out what to do with it live because it's such a pretty instrument. There's not a whole lot done with the genre of punk rock classical guitar, so it was my intention to go there and work around the instrument's prettiness."

Ribot employs several extended techniques when performing and recording. Many were showcased in a major way on The Book of Heads, his 1995 CD of 35 John Zorn-penned etudes for solo guitar. Some of them include using a cappuccino frother, vibrator, or miniature fan to hit the strings to create a cimbalom sound, as well as letting the pickup absorb the sound of the motor to generate raucous growling; placing a pen under the strings to create a moveable false bridge to alter fret relations; licking his fingers and rubbing them around the body to produce squeaks; playing electric guitar unamplified and externally miced like an acoustic guitar; pressing strings behind the bridge and the nut to change pitch; playing tape recorders against the pickup to make it function as a mic; and even raining rice down on the strings for staccato percussive effects.

"I'm bored with most things on guitar," says Ribot. "Eight zillion people have tried to play as fast as they can, and so what? The sounds we're talking about are not part of the tempered scale, but are part of the established language of free improvisers and downtown New York City noisemakers. They're not part of what most kids learn in music school. It goes back to one of the oldest understandings of why people make music at all, and that's because music is mimetic of nature. That theory bored me too until I understood what composers like Zorn, Elliott Sharp, and Arto Lindsay are doing, which is creating the mimesis of the absence or death of nature, and our connection to it. Understanding ideas like that will get you a lot further than going to Berklee."

One of the highest-profile gigs Ribot has landed was the lead guitarist role on Robert Plant and Alison Krauss' recent Grammy Award-winning Raising Sand CD. The blues-infused, country-rock disc called for Ribot to splash around using his inventive approach, without jumping too far into the sonic deep end. But he couldn't resist at least briefly going against the grain.

"I admit that I wasted one night during the sessions on my fantasy of being Jimmy Page," says Ribot. "I made them set up a bunch of Marshalls and did a lot of overdubs on which I sounded like the king of metal. I was trying to purge a certain demon and I quickly realized I'm not Page and got over it. It just wasn't appropriate for the session. I realized there are some tracks on the record that have an interface with the Led Zeppelin sound, and the way I made peace with that was to go there by using a gestural language. I wanted some of my lines to sound as if I'm a hip-hop DJ sampling guitarists, including myself. It's the postmodern condition, baby."

Ribot got to extend his fantasy when he performed "Black Dog" with Plant and Krauss as part of a Country Music Television special.

"As a kid, I worshipped Zeppelin, but had never actually covered that much of the material, so it was a great experience," says Ribot. "When I really started listening to 'Black Dog,' I realized the main lick is strongly influenced by North African music combined with a classic blues melody. So, I played the introduction on a $40 banjo that sounds somewhat like an oud. Later in the tune, I pick up my Stratotone. I also made peace with my Page urges by better understanding the difference between using a sonic gesture and the act of replication. Sometimes just using the gesture is the most respectful way to go."