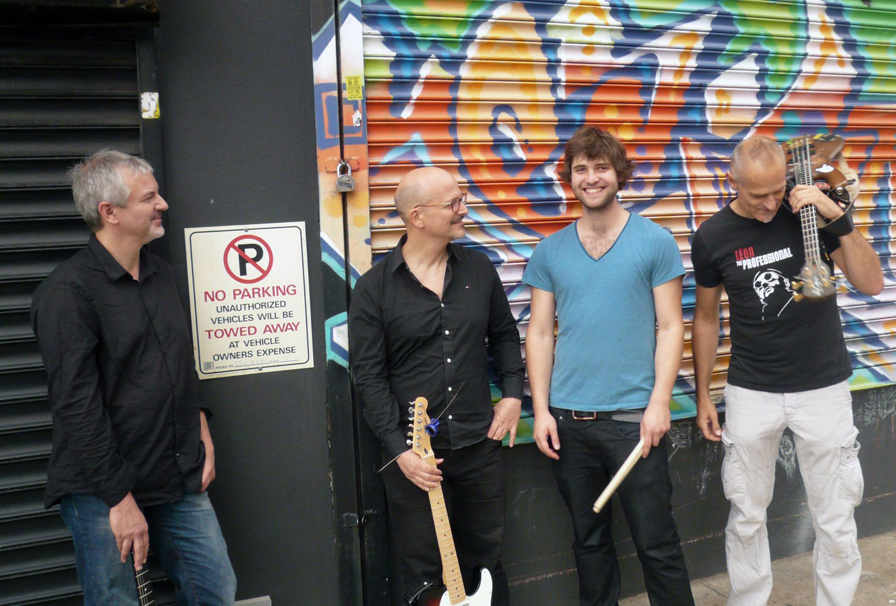 Everyone in Sonar shares a common goal: Disproving the notion that everything that could ever be done with music has been done. The Swiss quartet’s minimalist-groove compositions on its second release Static Motion were designed to break new ground by invoking a series of carefully architected rules and processes. The band’s system manifests itself in a pattern-based approach that relies on concepts of negative space and iterative rhythmic progressions, and its sound traverses prog-rock, new music, ambient, and funk.

Founder and guitarist Stephan Thelen came up with several key principles to encourage the band—which is also comprised of guitarist Bernhard Wagner, bassist Christian Kuntner, and drummer Manuel Pasquinelli—to work on a blank canvas. The environment was one in which anything could happen, and the limitations of traditional music forms were willingly abandoned. For example, the band agreed to avoid conventional major/minor harmonies, and concentrate on tritone harmonics. Routine 4/4 beats were outlawed, while polyrhythms and isorhythms were celebrated. Soloing and intentional virtuosity were jettisoned in favor of group interplay.

What is Sonar’s mission?

Thelen: To fuse a minimal aesthetic with the visceral power and dynamic range of a progressive rock band. Minimal music—especially the early music of Steve Reich—is a great influence on all of us. The minimal approach of doing as much as you can with as little material as possible still seems to me to be one of the best principles for a satisfying composition. The combination of repetitive minimal music with groove-based styles like funk and jazz appealed to us as a way to create adventurous rock music.

We also knew we wanted a new and unique sound that would set us apart. Partly inspired by Glenn Branca’s music, I created a new tuning in which the guitar is tuned to tritones—C-F#, C-F#, C-F#. We tried it out and never looked back. We all loved the natural harmonics of the tuning, and decided to go one step further and play as much as possible only using these harmonics. That led us to a whole new harmonic system that we call “tritone harmonics,” and that has a rather dark, mysterious, and strangely addictive timbre totally unlike anything you could create with conventional major or minor harmonies.

How do you collectively determine the duration of a groove before a change is required?

Thelen: Because our music is concept-based, there is sometimes a conflict between a theoretical idea and its practical realization. For instance, if a groove consists of three different simultaneous rhythms, let’s say 3/4, 4/4 and 5/4, as in “Landslide,” it takes a rather long time—in this case 60/4, the least common multiplier—until the first beat of all three rhythms coincide, and the whole cycle is completed. Sometimes, this can feel too long, and we are tempted to trim the length of the groove. There are often discussions about how true to an idea we should stick. The question we often ask ourselves is, “What’s more important—to be true to an objective idea, or follow your subjective intuition?” 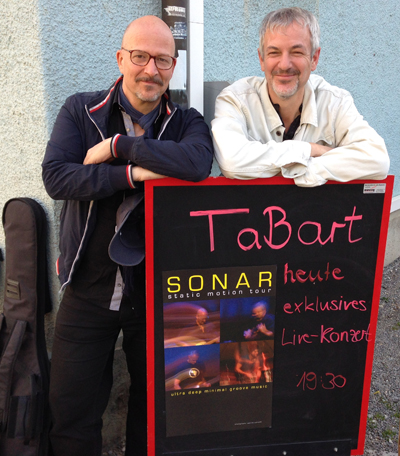 Take me through your signal chains.

Thelen: Our goal is to have as little gear as possible—not only for practical reasons, but also as a philosophical statement. In a live context, I use a Steinberger GM with a custom body. It’s a very good, light guitar with a fast neck and excellent hardware. It stays in tune and is perfect for travelling because it’s rather small. The pickups are Gibson 490R and 490T Humbuckers. It has an Alder Les Paul Custom-style body made by Swiss luthier Matthias Wolfensberger. I plug it straight into a Dunlop DVP1 volume pedal and a Strymon blueSky Reverberator. Next, the signal goes into a Fender Mustang III amp. In the studio, we go straight into a Line 6 Pod HD.

Wagner: I use a 1970s Japanese Luxor Telecaster copy. I replaced both pickups with Kinman 60’s Custom Set pickups, and I changed the treble pot to a Shadow SH 124-500 kill pot. Apart from that, my signal chain is identical to Stephan’s. Our joint aim is to expose the differences in our playing as clearly as possible. For example, the different angles our picks hit the strings. These subtle differences are more discernible with as similar a signal chain as possible.

Describe how your minimalist concept extends to the realm of effects.

Thelen: I used to have dozens of effects, and I always bought the newest gadgets—until I realized that true musical innovation is in the mind, in the heart, and in the hands of the player, not in the technology. There was a point where I had so many effects onstage that I couldn’t fully concentrate on the music, because I was constantly thinking about my gear. I decided I had to pare it down to the basics so that I could again give the music my fullest attention.

Wagner: It’s part of the sound concept of Sonar to only use reverb. I’m very happy with this choice, because it reminds and encourages me to experiment with different sound qualities obtainable only by different playing techniques. For instance, I’ve started choosing guitar picks specific to the pieces we play. Some of them require a lot of harmonics, where I use a pick with pointed tips that I sharpened by clipping material off using scissors. Also, where you pick the string along its length makes a big sonic difference.

Another aspect involves playing harmonics. Usually, you aim for maximum sustain, but at the end of “Triptych,” we’re looking for the sound of a clock slowing down—in other words, short, metallic sounds. Staccato notes on the guitar are usually achieved by damping with either the right or left hand. But in our context, damping also involves removing the higher frequencies, so the technique is to place the left hand slightly off the ideal spot on the fretboard.

How do you work together for the benefit of the music?

Thelen: We often think very hard about how to make to the music more interesting in a structural, three-dimensional kind of way. For instance in “Twofold Covering,” there is a pattern of ten chords over two bars of 11/8, during which we decided to circulate the chords. I play the first chord, Bernhard the second, and so on. That idea didn’t change any notes in the composition, but it radically changes the way the audience perceives the music, because it’s much more exciting when the chords jump back and forth in space.

Wagner: Stephan and I have been playing together for a few years now, and we have a similar approach when it comes to rhythm. On the other hand, regarding playing styles, Stephan is more rock-oriented, while I have more of a funk background. Our different stylistic backgrounds lead to slightly different sonic approaches which complement each other well, particularly when we play unison or interlocking parts.

How do you stay out of each other’s way?

Thelen: That’s never been a problem or a concern. We have more or less the same sound, and we actually want to sound like one big stereo guitar where Bernhard is on the left and I’m on the right. The stereo division is a geometric concept that is really important to me. I don’t think Sonar’s music would work in mono.

Wagner: Everyone in Sonar has a good sense for orchestration. So, when someone comes up with an idea, the other band members will quickly find the regions in the sonic, tonal, and rhythmic spectrum that support the idea. Also, many of the ideas come with clearly-defined parts that don’t contradict or undermine each other.

What’s your perspective on how pattern-based music affects the perceptions of listeners?

Wagner: We realize it’s raining when the first raindrops fall. We either pay attention to, or ignore the ongoing rain, but any change in its pattern is immediately noticeable. Pattern-based music has a similar effect. Once we’re accustomed to a pattern, we surf on it and become very aware of even subtle changes. So, listeners can’t help but be drawn into alternating sections of repose and alertness.

Thelen: Gradually evolving, pattern-based music gives the listener a much more active and liberating role in the ritual of performing music. It’s not about being passively entertained, about personal feelings, or about admiring musicians with great technical abilities. It’s about players and listeners being together in the same space and at the same moment in time, standing in awe of the seemingly infinite power of music, and working together to gradually create something remarkable.