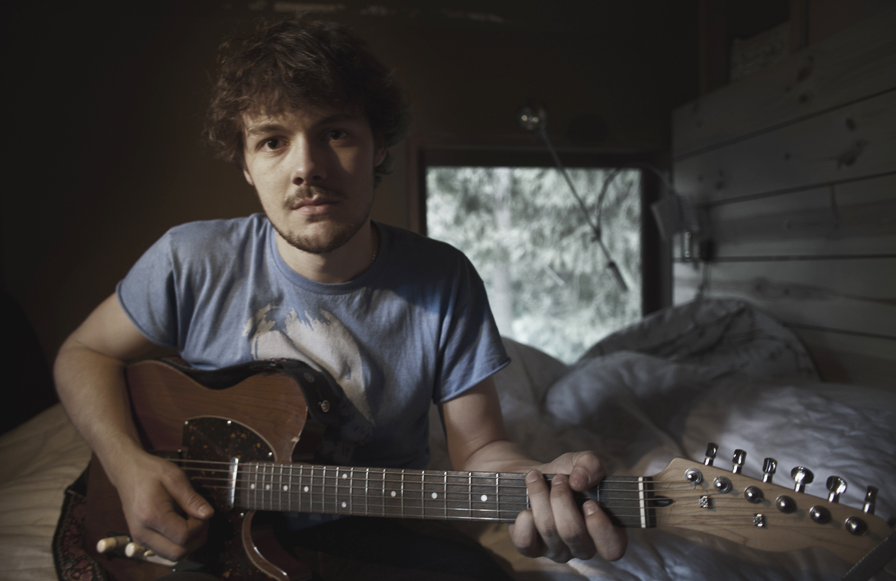 Sam Weber’s expansive blend of driving rock, dream pop and roots influences is a testament to fierce ambition. At 19, the singer-songwriter and guitarist, along with his band River, have just released an epic debut album in Light Up to Burn Out. The album features 18 adventurous, linked songs infused with deep wit and wisdom that reach far beyond Weber’s years.

Hailing from the open skies and minds of Victoria, British Columbia, River is a group of multi-instrumentalists. Weber and fellow band members Marshall Wildman and Evan Hillier all share bass, drums, piano, and synth duties. Together, they’ve created an impressive effort that manages to be both artful and addictive.

Describe the concept behind Light Up to Burn Out.

It documents the bitterness and detachment that occurs when a band breaks up. River had a previous quartet lineup that was really tight and then half the band quit, annihilating everything we had worked for to that point. We faced the challenge of restarting and captured the journey on the album.

Who are some of your key guitar influences?

When I was 12, I was into Joe Perry and Brad Whitford from Aerosmith. Next, I progressed into a lot of classic rock, like Rush and Stevie Ray Vaughn, including his work with David Bowie. It’s a phenomenon of my generation to resent modern music. Until I was 15, I couldn’t relate to anything after 1989. I needed to hear a guitar solo in a song in order to have the time of day for a song. At 16, I opened up to current music, including John Mayer, who has real guitar chops, as well as a cool, weird Canadian band called Metric and its guitarist Jimmy Shaw.

What guitars did you use on the album?

I used a 2010 Gibson SG Classic with stock P-90 pickups. Typically, SGs don’t have P-90s, but they sounded pleasantly strange, which was the deciding factor. They have a sweet, natural kind of gain and crunch to them, even before the signal goes into an amp. I also played a modified 2002 Fender Stratocaster with a Fender Fat '50s Strat pickup set and a Fender Custom Shop tremolo system. In addition, I used a 2010 homemade Telecaster that my dad and I built featuring Seymour Duncan pickups.

My most-used pedal is the Electro-Harmonix Holy Grail reverb for Daniel Lanois-style atmospheres. I also have a Z.Vex Box of Rock for really nice, present crunch and overdrive. I use an Ibanez TS9 Tube Screamer for all the gain sounds, on top of what’s naturally there on my Gibson SG. For slapback delay, I rely on the Ibanez AD-9 analog delay.

You favor .13-gauge d'Addario strings. Why do you like them?

Tell me about the recording setup for the album.

I used a two-mic setup, with one Shure SM57 pointed at my two amps: a vintage Silverface Fender Super Reverb with Blackface circuit and a Matchless 35 Clubman with a Yorkville 2x12 cabinet. I also used an AudioTechnica AT2020 condenser mic to capture the thickness of the room ambience. From there, it went to an Apogee Duet converter and into Logic Express. We set up the drums in the corner of my bedroom. I threw some rugs up on the wall to create an acoustically-controlled environment. We ran drums through a Mackie 16x8 analog mixer into a Zoom R16 multitrack recorder which also fed into Logic Express. Every day, we fought with sound quality, but our philosophy was even though we didn’t have the greatest converters or preamps, we could play well and mess with mic placement. We paid attention to everything we did have control over to put together what we think is a quality release.

You attended Berklee last year through a scholarship. What did you take away from that experience?

It’s so competitive. When you’re there, you could easily forget what music is about, which is making art, not one-upmanship. You could lose your mind trying to be as good as the next guy. What I learned is to completely ignore what everyone else is doing, maintain my own voice, and get on with things on my own terms.