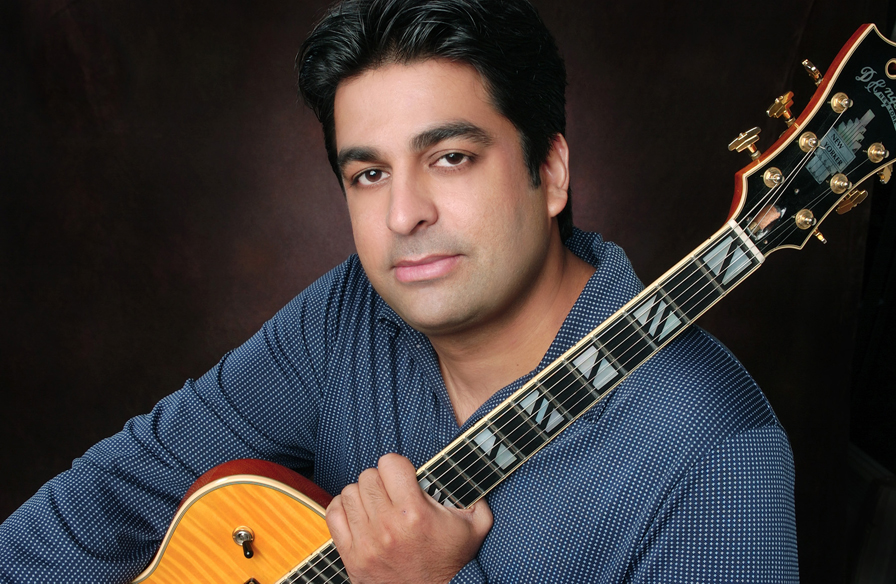 Jazz-fusion guitarist Rez Abbasi has a unique take on the ongoing debate surrounding his genre that hasn’t ceased since its inception in the late ‘60s.

“There’s nothing wrong with the word ‘fusion,’” explains Abbasi, who plays an inventive, Indian-inflected version of the form. “People criticize it by linking it to specific historical periods, but concepts can’t be etched in stone because they are inherently philosophical and always mutating. Music is a reactionary creative process. Musicians live in their surroundings and either accept or reject what’s out there. I like to consciously do both. I accept ideas, but reject imitation and the result is the hybrid music I create. Relating it to the past sucks the creative life out of it. You’re not moving on and opening doors to new musical events.”

He swings the door wide open on his fifth and latest CD Bazaar. The disc finds Abbasi as part of a fiery organ trio including keyboardist Gary Versace and drummer Danny Weiss. It also features Indian music luminary Kiran Ahluwalia on vocals and rising jazz star Rudresh Mahanthappa on saxophone. The combination yields an intricate, layered and highly melodic group sound with a focus on Abbasi’s fleet-fingered approach full of thrilling, extended runs and flurries.

“What makes my music work is that the influences of India penetrate it on an organic level,” says Abbasi. “I listen to and study Indian music and then have it evolve through a modern jazz paradigm. It’s not like I’m putting music together saying ‘let’s throw a tabla player here, a sitar player here, and now let’s go into the jazz section.’ When you do that, you’re just cutting and pasting things and the listener can hear that. It’s why some fusion projects don’t work. So, I try to write tunes that have strong melodic content and sometimes invoke Indian scales. The tunes are also wide open enough that the band has the freedom to make their own statement within it without feeling boxed in.”

Born on the Indian sub-continent, raised in Los Angeles from the age of four, and now a New York City resident, Abbasi’s sonic worldview represents the sum of his cultural influences. He also attended the Manhattan School of Music, focusing on jazz and classical curriculum. As a result, Indian sounds represent one flavor in his playing and compositions, rather than serving as the basis.

“I’ve never been interested in directly copying sitar or sarod techniques because I don’t want to sound like I’m imitating Indian music,” says Abbasi. “When the Indian influence sneaks into my playing, it’s subtle, as opposed to a direct application of Indian musical principles. Take “Leather” from Bazaar for instance. It’s a jazz piece, but I include some phraseology from the sitar and sarod on my guitar which manifests itself in certain bends, slides, and pull-offs. However, I don’t emphasize those elements. If I didn’t have an Indian background, people might not even recognize them.” 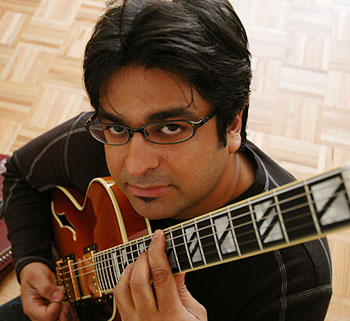 His two key guitars of choice are a D’Angelico New Yorker semi-hollow body electric and a Guild Songbird semi-acoustic.

“The D’Angelico is an amazing instrument. It has an evenness throughout the whole neck that allows every note to sing out equally. It also has great sustain and the ability to provide either a raunchy, trebly sound or a warm jazz tone. The Guild is an excellent petite, thin-body instrument that benefits from its small profile. It doesn't have that big folk-guitar sound most people go for. I use it mostly for soloing because of its almost child-like sound coupled with mature character and depth. I also use copper picks with it and that metal-to-string attack encourages higher and smoother frequencies, making it resonate and occasionally resemble a sarod.”

A Jerry Jones Sitar-Guitar customized with Seymour Duncan 59 Humbuckers rounds out his arsenal.

“I stumbled upon one and tried playing jazz standards on it and realized I didn’t have to sound like a fake sitarist on it. It’s a hybrid instrument for hybrid music. Also, its sympathetic strings can be used as an interesting comping device when other people are soloing.”

“The TC stuff is really warm and there is a lot of variety within each effect,” says Abbasi. “The pedals also let you create your own patches and put them into memory. I like the HBE Power Screamer because it has three separate types of overdrive that run the gamut from warm and round to hard-edged dirt.”

Abbasi just wrapped up writing for his forthcoming record. He chose to use Finale composition software to encourage himself to travel down new musical paths.

“Finale is fantastic because it enabled me to get away from the guitar and guitar music,” says Abbasi. “I wanted to distance myself from things like familiar chord voicings and work with a palette of 12 tones and only use my ear to justify the music. The result is a lot of interesting patterns, intervallic combinations, melodies, bass lines, and contrapuntal grooves that I would never have come up with on guitar. The interesting challenge now is getting the guitar parts under my fingers because they are very difficult and unusual because they weren’t written for or on guitar.”

Some musicians find initially approaching the idea of integrating Indian music elements into their work daunting. Abbasi has some simple advice for them.

“Take a trip to India if you can, because the music is intimately linked to the place where it’s formulated,” says Abbasi. “If that’s not an option, attend some Indian concerts and watch a sitarist up close and how he interacts with other musicians. Also, listen to as many Indian recordings and read as much about the music as you can. After hearing a lot of albums, you’ll find the vocabulary starting to seep into you and you’ll intuitively understand how your own playing differs from the Indian approaches. From there, you’ll begin to grab onto things and bring them into your own music.”