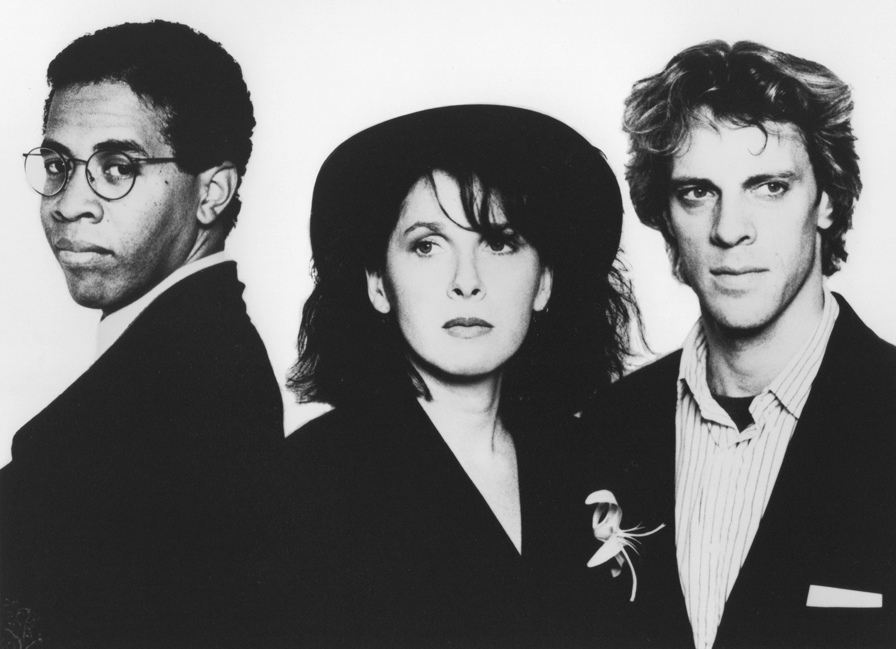 For years, ex-Police drummer Stewart Copeland and groundbreaking fusion bassist Stanley Clarke wanted to put a band together. Although content with channeling their energies into the jazz and soundtrack worlds, they also desired an outlet for their pop leanings. In 1987, they chose to commit to the idea and began the search for a singer-songwriter capable of inspiring their energy and enthusiasm.

After sifting through hundreds of uninspiring audition packages, the duo came across a two-song demo tape from an L.A.-based performer and piano teacher named Deborah Holland. They instantly fell in love with her lush voice and intelligent, dynamic songs. Two weeks later, the trio was on tour in Brazil road-testing material that would end up on Animal Logic's self-titled debut CD.

Although the inevitable media microscope focuses on Copeland and Clarke's celebrity, the success of Animal Logic's funk-infused pop is largely the result of Holland's influence. After all, every song on the disc was written by her. Clarke and Copeland also smartly chose to keep her soaring voice upfront and instrumental pyrotechnics in the background. The result is one of the sharpest and most intriguing collections of adult-oriented songs to come along in years.

Holland found a few moments to speak to Innerviews about her new gig.

The album exclusively focuses on your songs as interpreted by Copeland and Clarke. What's your take on the end result?

I'm very happy with what they've done with them. I used to have complete control over my work, so it was a little frightening to give up the reigns at first. Most of the songs were already written. "There's a Spy (In the House of Love)" and "Firing Up the Sunset Gun" were the two tunes that were on the original demo. "Elijah" and the ballad "I'm Sorry Baby" were the only songs on the album written after the band got together.

Does your songwriting stem mostly from personal experiences?

The songs are based on personal experiences, but they're exaggerated. I can also be pretty voyeuristic and I write about other people's relationships and what they're going through. I'm not a fan of formulaic songs. So, you can say I'm definitely a fan of the autobiographical or confessional school of songwriting. I've always thought the songs were really accessible. But no-one else did as far as record companies, until now that is. 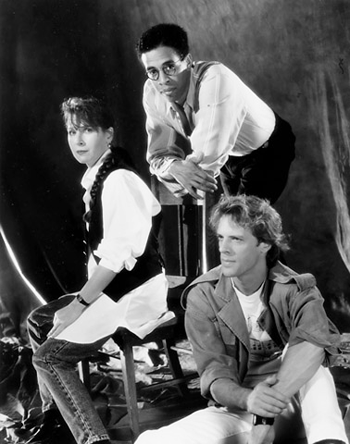 What inspired "There's a Spy?"

That's a tough one to talk about because it starts to sound like gobbledy-gook. I hate to use the word "spiritual," but it's somewhat of a spiritual song. I'm not a spiritual person though. I carried around the song title for two or three years in a notebook. I never knew what the hell it would be about. Then I sat down one day and the song came out of me. It was one of those songs that seemed to kind of write itself. The song was written two months before the band happened and I had decided I was no longer going to depend on success in my career or a man in my life to give me happiness. It was a song about looking for happiness elsewhere or it's a song about looking for a man or a love to come into your life.

What about "Firing Up the Sunset Gun?"

I got the title for that from Walker Percy. He's a contemporary American novelist who wrote a book called Love In the Ruins in which he used a phrase called "firing the sunset gun," which was a term for using alcohol. "Firing up The Sunset Gun" sang better, so I took a liberty with it. It's a song about someone using alcohol as a crutch and having difficulties in life. It's an anthem for Alcoholics Anonymous. [laughs]

Copeland said one of the reasons he wanted to form Animal Logic is because he believes good pop music is more challenging to make than good experimental music.

I don't agree. I find writing pop songs an easy thing most of the time. Of course, you go through periods where nothing comes out. I don't find singing or performing so easy, but songwriting is something that always came pretty easily to me.

Why do you find singing and performing more difficult?

I get really nervous. I can't compare performing with this band to anything I've ever done before like playing in a club to 75 people on a Wednesday night. I enjoy it when it goes well, when the chemistry is right and everything seems to work. It's never bad, but it can't be magic every night.

Speaking of performing, you played keyboards for the first part of the Animal Logic tour, but then switched to vocals exclusively.

We're not using them anymore live. We used them for the beginning of the tour, but we canned it. It was just visually and musically more interesting and more open for me to just sing and not have to worry about playing.

What musical activities were you involved in prior to Animal Logic?

I was teaching piano, doing gigs in piano bars and trying to get my songs to publishers to get them recorded. I was making demo tapes with a little band I had together and doing what every other struggling Los Angeles musician was doing. I never had one thing happen to me until this other than two credits that are so minor that they're not even worth mentioning.

I sang background vocals on a Michael Des Barres album. I also once had a song in a horror movie that went straight to foreign markets called Sweet Sixteen. You only hear it in the movie for three seconds. In the scene, they turn on the radio and then start talking. [laughs] That was it. Those are the only things that ever happened.

The band's original name was Rush Hour. Why change it to Animal Logic?

Oh God! Is that awful or what? That was a last minute decision and it was a mistake. Rush Hour was just the name we used for touring Brazil. Miles Copeland [president of I.R.S. Records and Stewart's brother] had heard a tape of a punk band and he thought they were singing "Animal logic! Animal logic!" It turns out they were singing something completely different. But the name just seemed to fit us. As soon as we heard it, we loved it. It describes the music perfectly.

The album artwork is very striking. I understand it was originally pegged for the Police.

It was a rejected cover for The Police's greatest hits album. Stewart liked it, but the other guys in the band didn't, so Stewart hung it up on his wall in his studio in England. When he was talking to Miles about the name Animal Logic, Stewart said "Perfect! I have the album cover!"

Animal Logic was initially a quartet featuring Andy Summers on guitar. He even toured with the group in Brazil. Why did he leave?

When he came back from the tour, he decided he didn't want to do pop music anymore. He wanted to do jazz. So that's what he's doing now. A wonderful guitar player named Rusty Anderson plays guitar for the group now.

Some media outlets have said Miles Copeland was worried that if Summers and Stewart Copeland remained in the group together that it would permanently shatter any hope of a Police reunion for the future.

I don't think there's any truth to the rumor. If Andy had stayed it would have been just fine. It might have been more difficult for me though, because people would look at the band as just The Police without Sting. 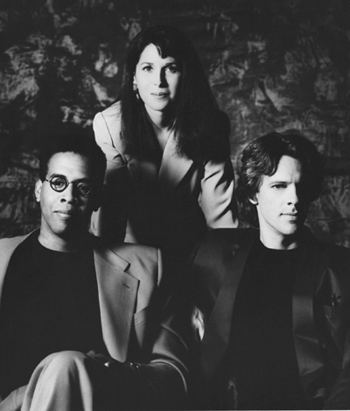 The disc features an eclectic range of guest musicians including guitarist Steve Howe and violinist L. Shankar. How did they get involved?

These guys know everybody! They can get anyone to come down.

Both Stanley and Stewart have done vocals on their past projects. Why are they absent from that role in Animal Logic?

I ask them all the time. They both refuse to sing. I tried to get them to and they won't. I really like Stewart's voice, actually.

The video for "There's a Spy" is unique in that it's very understated. You completely avoid any of the stereotypes women are expected to adhere to in the pop realm.

I'm not in spandex clothing, yeah. It wouldn't go with my personality. It doesn't suit the music and I would look ridiculous if I was. I don't dig the way women are portrayed in those videos. I don't dig it at all. I think it's unhealthy. It's a negative role model for young girls. I think it puts all the good things that came out of the women's movement back ten years. They're pretty disgusting, especially some of those heavy metal ones with all of the women with big breasts. It's sickening. There are some great women getting through though. Look at Toni Childs, Sinead O'Connor and Suzanne Vega.

Did you like or loathe the process of making the video?

I loved it. I was upset when the day ended. It was so much fun. An Australian woman named Michelle Marr directed it. She also did a video for a fantastic Canadian artist named Sarah McLachlan. We saw a zillion reels and they all looked the same until we saw Marr's work, so we chose her.

Joining Animal Logic means you've been thrown deep into the wildfire of the music industry. How are you coping?

I knew about the game of "you scratch my back and I'll scratch yours," but to actually experience it is amazing to me. Stanley and Stewart are not fazed by it at all. They know how it works. Going to radio stations in the hopes that they'll play your stuff is sort of bizarre. The music industry is what it is. There's nothing to like or dislike about it. It's like talking about Wall Street or the Insurance Commission. I don't understand how stocks and bonds work. I don't get the Dow Jones Industrial Average. It's such a mystery to me. I'm starting to see how the music industry works and I don't know how else it would function. It's the nature of business to be anti-creative. Here's how it is: You hate it if it's not working for you and you love it if it's your friend. It's just a business selling another product. It's no different from selling a bar of soap. And I don't care how they market it. I just write my songs. The rest of it is so complicated. There's all of these formats like CHR, AOR, album rock, dance music, black contemporary, black urban and country. It's so absurd. We just went into a studio, made the record and let the label worry about it afterwards.

There were several interesting pieces left off the album. What can you tell me about them?

I hear you're considering pursuing some interesting side projects outside of Animal Logic.

There's a little local band in L.A. called the Rails I'd like to produce. I'd also like to collaborate with some other people and do some background vocals. I wouldn't mind writing a musical like West Side Story believe it or not. And I'm going to score my first movie. I'm really excited about it. I.R.S. now has a film company called I.R.S. Media. They did Decline of Western Civilization Part II: The Metal Years. The movie I'm doing is called The Circuitry Man, which is kind of a futuristic, apocalyptic, adventure, thriller, romantic comedy.