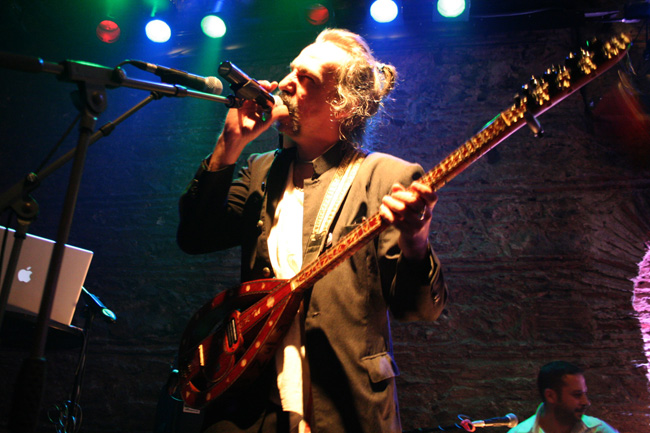 The saz is Turkey's foremost stringed instrument. With three to 12 strings on a bouzouki-like body, it possesses a pleasingly distinct and ringing high-pitched sound. Ertel plays a custom, 26-fret solidbody electric saz named Piyango that he designed, built by luthier Omer Uysal. It has an African redwood top, a Turkish maple body, and is equipped with an electric saz humbucker, a Fishman Classic 4 Deluxe preamp and pickup, and a three-way pickup switch.

"Saz goes back centuries," says Ertel, "but the first electric one was built in the early '60s. It's the only modernized Turkish instrument. For its first three decades, wahs, phasers, and fuzz boxes were used with it, but not together. Since the early '90s, I've taken a multi-effect approach to extend the instrument's possibilities."

"The most important effects to me are the octave shifter, wah, and delays," says Ertel. "I like using short slapback delay like 1950s rockabilly sounds. I've also set up my Line 6 M9 to run three delays simultaneously for wild echo combinations."

Ertel is fond of using his Boss OC-3 in poly mode, to designate note ranges associated with his unique string configuration.

Everything goes through an Orange Thunderverb 200-watt head with a Marshall 1960A 4x12 cabinet.

"I love the Thunderverb because it creates frequencies as low as 30Hz, which lets me take the saz into previously unexplored deep, low-end territory."