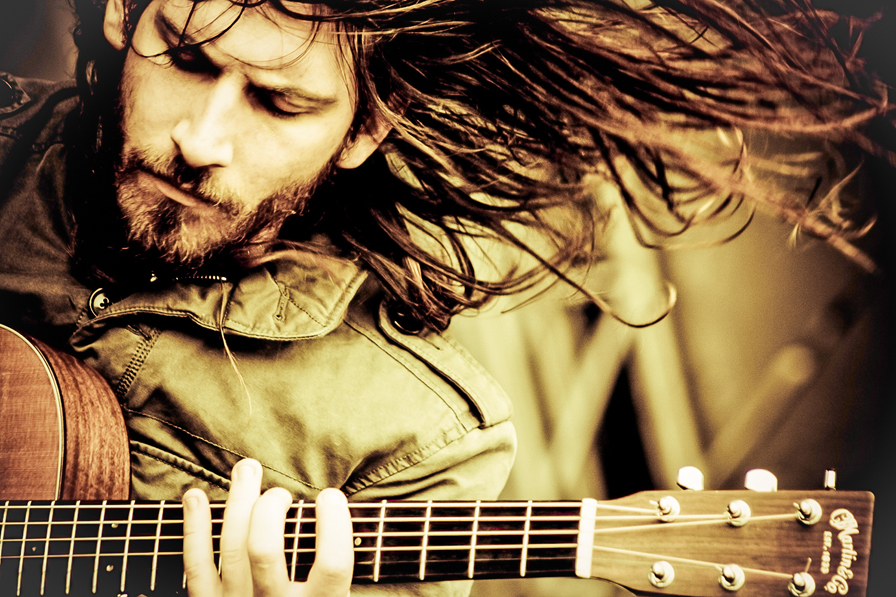 Guy Buttery’s goal is to stretch the boundaries of fingerstyle guitar to their outer limits. The South African guitarist traverses territory as diverse as folk, jazz, Celtic, classical, minimalism, Indian music, and flamenco on his new CD Songs From The Cane Fields [Iris/Greenhouse], making it the most diverse and intriguing fingerstyle album in recent memory. The album features Buttery’s lightning-fast, yet highly melodic two-handed tapping and fingerpicking approaches that yield some truly dazzling percussive and polyphonic moments.

“The album delves into the subtleties of what I like to call ‘avant-garde folk,’” explains Buttery. “The ideas explored while writing were of dissonance, interchanging rhythms, and the vast, continuing search for new sounds on the 6-string. Music speaks a million languages and can clearly articulate every human emotion, and the guitar is an ideal vehicle to express that versatility. Unlike instruments like the banjo or sitar, it’s not genre-locked and can be used in every context imaginable. Texturally and harmonically, it all comes in one package with the guitar.”

His instrument of choice for recording and performing is a Takamine ND25C, a super-jumbo, steel-string guitar with a solid cedar top.

“It’s the fattest-sounding acoustic guitar I’ve ever heard without requiring the aid of effects or processors,” says Buttery. “I really love the overall sonic balance of the instrument and am often overjoyed when I open my guitar case, pull it out and realize how good it sounds. I enjoy the fact that it’s well balanced, quick to respond, light to the touch, and has a nice, round low-end.”

Buttery relied on the natural range and warmth of his Takamine to help carry the recording sessions for his new album held in his living room.

“I wasn’t keen to go the full-on studio route because I’ve never felt comfortable in one and always felt my playing suffers from it,” says Buttery. “Having lived in my house for 12 years, I felt it made sense to use it to record the music originally written in that environment. The setup was relatively simple. I used a local mobile studio with ProTools. All the tracks were done live excluding a couple of minor overdubs, and the entirety of ‘Renwot,’ a tip of the hat to Ralph Towner in which I played both guitar and piano. The album was predominantly recorded using Oktava MK-012 multi-capsule condenser mics. One was placed at a 45 degree angle to the 12th fret, about six inches away from the guitar. The other was placed further away, loosely directed at the sound hole. I also used an old valve mic throughout the album placed diagonally down from the soundhole, between the saddle and main soundboard area near the side of the guitar. The valve mic sounded terrible on its own, but great when mixed with the Oktavas. The combination made the overtones and harmonics of the instrument come alive and sound so real. In addition, I sparingly used two Crown mics for ambience placed at the entrance hall leading to the living room.

Buttery invokes a variety of altered tunings on the album, but relies mainly on DADGAD, which he first heard in his youth when Jimmy Page invoked it on Led Zeppelin’s “Kashmir” and "White Summer/Black Mountain Side."

“Open tunings can be a bit daunting at first, but new and interesting finger patterns always emerge and ultimately, new ideas too,” says Buttery. “I even find if I assign new fingerings on the left hand and different strings for each finger on the right hand, I come up with new ways to approach things. I agree with Joni Mitchell who once said ‘If you want to explore something new, the first and most obvious step is to look at it from a different angle.’”