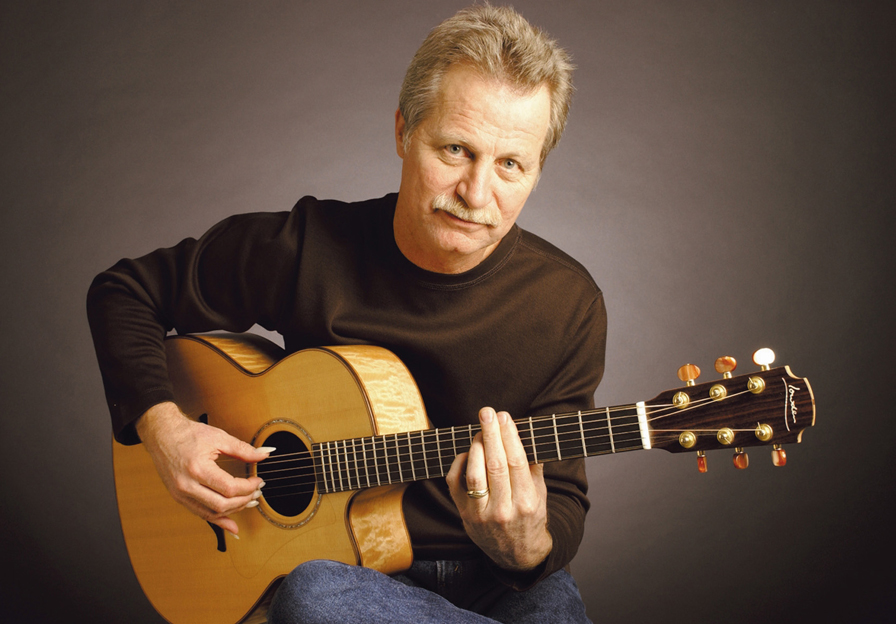 It would be easy for Alex de Grassi to rest on his laurels. He’s widely revered as one of America’s foremost steel-string fingerstylists. And his solo guitar recordings, including highly influential albums such as 1978’s Turning: Turning Back [Windham Hill] and 1981’s Clockwork [Windham Hill], stand as high watermarks of the progressive fingerstyle realm. Those discs and many of his subsequent efforts find de Grassi exploring folk, neo-classical, and world music elements with impressive technique that incorporates intricate picking, cross-rhythms, dazzling arpeggios, and ringing harmonics.

His latest release, demania [Tropo Records], is a trio effort that takes his expansive approach and combines it with the talents of an equally virtuosic rhythm section comprised of electric bassist Michael Manring and percussionist Christopher Garcia. The band shares telepathic communication in its genre-blurring journeys through realms as diverse as jazz, rock, Indian, and Appalachian musics. But part of the attraction for de Grassi was creatively approaching the challenges inherent in making the trio work. A case in point was meshing his sound with Manring’s “lead bass” approach that incorporates open tunings and similar frequencies to guitar via innovative instruments such as the three-octave Zon Hyperbass.

"Because Michael is such a wonderful and unusual bassist, there has to be harmonic coordination between the two of us, but a lot of freedom also results from that,” explains de Grassi. “Michael often plays melodically, which enables me to fulfill the role of providing the harmony. Other times it’s the other way around with Michael in a more traditional bass role, which gives me real flexibility on the melodic side. Michael and I will also play melodic lines together in the head which then break down into a rhythmic or harmonic situation with room for improvisation. Sometimes there are sonic collisions or what Michael does cancels out what I’m doing and vice-versa. So, it’s a matter of arranging the music and saying ‘play something more simple here’ or ‘just play a rhythmic pattern at this point instead of the changes.’ Working with Michael has been fantastic because he’s forced me to improve some chops that I haven’t spent a lot of time on. For example, I’ve had to learn how to play single line stuff with better articulation and speed. It’s funny. After our first gig I said to myself ‘It’s kind of embarrassing not to be able to play nearly as fast as the bassist. I better get my act together.’”

Working with Garcia, who performs on hand percussion, including Indian instruments such as tabla and kanjira, and the Latin mbwata, also provided de Grassi with another unique context in which to situate his playing.

"My favorite instrumental accompaniment is percussion, however, the truth is a trap set can sound pretty heavy handed with acoustic guitar,” says de Grassi. “It’s very hard to get a nice balance. However, because Chris focuses on hand percussion, he’s not that loud and his playing doesn’t eat up as much of the sonic range as a trap set. That allows for a lot more transparency and enables the subtleties and intricacies of the acoustic guitar to come through.”

"The signature guitar is a variation on the Lowden F model,” says de Grassi. “It’s a concert-size guitar and has quilted maple backs and sides, and a Sitka spruce top. The fingerboard has less curvature and a larger radius than the standard model because I wanted it to have some of the characteristics of a classical guitar. I also had the neck profile made a little deeper so it curves up around behind the neck. It has a full, round profile which gives you more room so you don’t have to close your hand when you play the guitar. The guitar’s cutaway extends to almost the eighteenth fret to make access to that part of the fingerboard easier. To compensate for that, George made the lower bout a little wider and brought the waist in a little bit. I specifically requested quilted maple because I think maple guitars really shine and have more volume than other woods.”

While de Grassi’s current focus is his trio work, his solo guitar endeavors continue in concert and in workshops across the globe. His signature method of weaving myriad lines and patterns together to create the illusion of multiple guitars remains a pillar of his solo sound. The approach is chronicled in note-for-note transcriptions of his most well-known pieces in his new book The Best of Alex de Grassi [Hal Leonard].

"Whether I’m writing original music or arranging someone else’s, I try to take all of the sonic textures, lines, and rhythms in the music and put them together in a way that sounds very orchestrated,” explains de Grassi. “Take one of my earlier solo pieces ‘Turning: Turning Back’ as an example. It has a double-time section in which I play a fast rhythmic pattern. I set it up so there’s a lot of repetition of the same notes in the pattern because the EBEFBE tuning I use lets me play them on adjacent strings with the same pitch. Some of the notes are staccato, some are sustained, and some have a rubato to them. Once I set up that pattern in the listeners’ mind, I’ll introduce a melodic line and stop playing the pattern momentarily. Because I’ve already set up the expectation of hearing that pattern, I can move away from it for one to four beats and play the other passing line. In the mind of the listener, the other part is still going and that is an excellent device in arranging for solo guitar. It lets you apply of a lot of detail to the music and creates the illusion that there’s much more going on in the music than what actually meets the ear.”