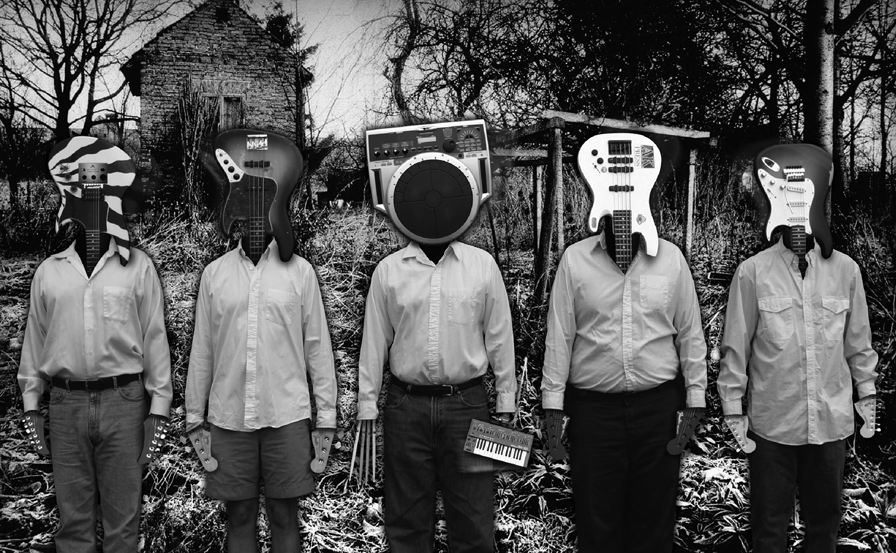 Fire and fury collide with atmospherics and ambience in Djam Karet’s unique take on prog-rock. Founded in 1984, the Southern California-based quartet’s dark and moody music combines prog with fusion, ethnic influences, tape manipulation, and electronics. It’s an expansive approach that’s establishing the band as a favorite among listeners with a taste for adventure.

The names of its compositions, including "Feast of Ashes," "The Naked and the Dead" and "Grooming the Psychosis” capture the vibe of the group’s sound. As for the band’s intriguing name, it’s taken from a Malaysian phrase that further relays its proclivities.

“Djam Karet translates into ‘elastic time’ or ‘the hour that stretches,’” said drummer Chuck Oken, Jr. “If you're going to meet someone at four o'clock and you’re late and get there at seven, you'd say 'Oh man, Djam Karet!' It’s about time passing without being aware that it is. It's like good sex, talking with a friend or when we do improvisation. It might seem like 10 minutes, but it might go on for hours."

"While it’s true that the music we like plays through us, we’re intent on following our own path," said Oken. “For instance, we started out in improvisational territory. It was like 'Henry, you start! Mike you start!' We kind of caught on at the college scene. We captured that era on our first cassette release from 1985, No Commercial Potential—a collection of studio improvisations that documented the beginnings of the band."

Djam Karet's next effort, 1987's The Ritual Continues, struck a trippy balance between improvisation and structure. Its follow-up,1989's Reflections from the Firepool, found the band taking its most propulsive, composition-oriented approach to date.

With larger audiences taking notice, the band chose to release two discs in 1991. Suspension and Displacement finds Djam Karet at its most ethereal.

“There's no drum kit on that album—only sparse percussion,” said Oken. “The album was an opportunity to capture reflective moments and spaces to crawl into.”

Its other 1991 album, Burning the Hard City, showcases the band at its most intense.

"After Suspension, we said 'Let's go back to writing pieces the way we used to," said Oken. "So, we rehearsed for six months and put together some huge metal-fusion pieces. It's an album of structured music, but there's improvisation within the structure. After two or three years of playing pure improv, we found that there were certain themes that we kept going back to and it sometimes ended up not being totally new. Taking a hybrid approach is proving to be a great way to work for us."

Djam Karet’s uncompromising direction comes at a price. Few labels have been willing to consider signing the band. And those that have expressed interest want to modify the group’s sound.

“They’ve requested the inevitable compromises—either shortening the tunes or adding a vocalist,” said Oken. “At this point, we're not chasing a label. A label would have to chase us because it would have to be behind what we're doing. When you don't compromise, you don't want to start, and that's definite."

For now, the band is content to continue releasing its albums independently. It’s willing to do whatever it takes to get the word out, including playing less than glamorous gigs.

"We've played art galleries and coffee houses," said Oken. "We’ve even played cafeterias. At the cafeterias, we did a lot more of the quiet stuff. We’d play weird loops and inverted sounds. Sometimes, people just came up to us and talked to us without even realizing that we were playing. It was a total crack-up.”