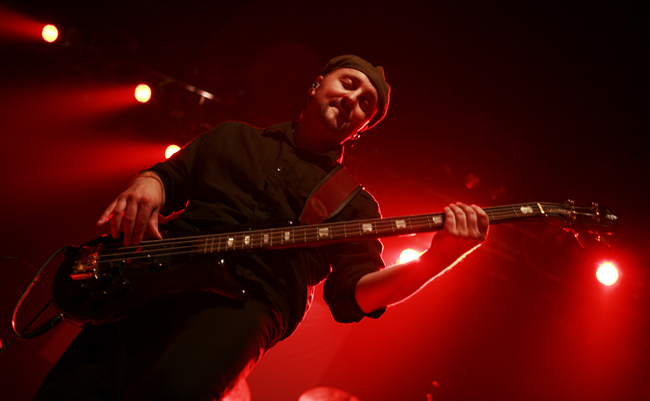 Adventurous British rockers Porcupine Tree take listeners on a wild ride on its latest album Fear of a Blank Planet. Bassist Colin Edwin helms the low end through a 50-minute journey that explores youth alienation fueled by modern media and consumer culture. The progressive metal-tinged album possesses a cinematic feel with pieces that combine supercharged rhythms, ambient textures, odd time signatures, and lengthy instrumental passages into a seamless, exhilarating whole. In addition to working with Porcupine Tree, Edwin is part of Ex-Wise Heads, an eclectic ethno-fusion act that has two new releases out, Grounded and Holding Up The Sky. He’s also a member of Random Noise Generator, a metal act acclaimed for taking influences from all eras of the genre and merging them with thoughtful songcraft.

How does the mercurial nature of Porcupine Tree’s music affect your role in the band?

It means I have to take a solid bass approach and fill out the spaces because the band’s sound is very sonically dense. It’s full of layered guitars, keyboards, and intricate drumming, which typically leaves a very defined area for the bass. So, I’m sort of a pivot for everything going on. Having said that, the band’s music also has parts where the bass doesn’t necessarily play the root of a chord in sequence, so there are a lot of inversions going on, which is quite unusual for most rock acts. There’s a real discipline involved in being a bassist in this band. If I played really busily all over the place it would make the music a mess.

What is the key musical challenge you face?

Our drummer Gavin Harrison likes playing “rhythmic illusions” in which he makes small changes to drum patterns that make it seem like the tempo or time signature has altered. He also sometimes plays across the bar line, as well as throws in fills when he’s playing a groove. So, I have to be totally focused to be comfortable with where he is all the time. I practice with a metronome way to prepare myself. Typically, if you include the octave in a major scale, you’ve got eight notes. And if you’re playing in 4/4, you have a nice even set of beats and notes that go together and resolve on the one. If you take that scenario, but play it as a seven beat scale so you miss the octave, but keep the click so it’s still going on every other beat, you notice that you have to play the scale twice before it resolves on the one. So, there’s a moment when you’re playing the scale the second time when the click is no longer where you expect it. By the third time you play the scale, you’ll hear the click on the one. This regimen helped me with Gavin’s approach by reinforcing that the time is still there and that it will eventually resolve.

Describe the approaches you explore on "Anesthetize," the album's 17-minute epic.

The first section is very ambient and driven by spare tom parts, so it was a rare case of deciding that something melodic, high up the neck would work nicely. When I initially recorded the piece, there was also a big space in the first part that was just a drumbeat and chords, so I played a solo there. Later, Alex Lifeson came in to do a guitar solo in that section too which was arranged over mine with great results. Next, the guitar and bass play a unison thing together, which called for a deep sound, so I tuned the bass to C, F, B flat, E flat for that part. After that, I'm following the guitar riff and outlining the root movement of the changes. The last part is very slow and spacey which I matched with very long, slow notes mostly comprised of root notes. I also do some double stop playing to make things less obvious. It's a great, dynamic piece that underlines how bass functions as an essential cog in the machine.