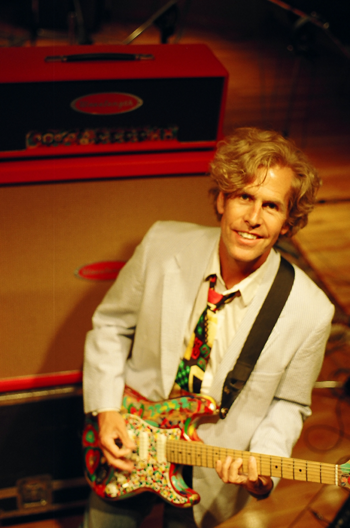 I realized when I was a teenager that my favorite guitarists always had a tone I loved,” explains guitarist and singer-songwriter Rob Fetters. “That especially held true for George Harrison. His Rickenbackers and Gretschs sounded like a stick of Juicy Fruit gum to me. They were sweet, melodious, chunky, and satisfying. I’m trying to have that same aural impact when I make my own recordings.”

Creating endearing and enduring tunes has long been Fetters’ specialty. He’s best known for his integral role in three critically-acclaimed power-pop bands: psychodots, The Raisins, and The Bears. Each group shares line-ups featuring combinations of Fetters, guitarist/vocalist Adrian Belew, drummer/vocalist Chris Arduser, and bassist Bob Nyswonger. The latter act is also the subject of a new documentary titled Out of Hibernation, now appearing on the film festival circuit. In addition, Fetters is a composer and producer at Sound Images, a commercial music studio in Cincinnati that specializes in post-scoring television ads.

Fetters’ new solo CD Musician reflects a diverse musical philosophy. The disc is chock full of painstakingly crafted songs steeped in irony, hilarity and fun. But while Musician’s tracks are irresistibly addictive, they’re also unafraid to take offbeat detours. Its songs combine an XTC-meets-The-Beatles-meets-Talking-Heads sensibility with a hint of inspired, Zappa-esque lunacy. Fetters’ guitar work is equally varied. Musician runs the gamut from raging wailing to intricate acoustic picking. One of the keys to the album’s unique personality is its diversity of tone-related approaches.

"I sometimes use tone to express feelings such as warmth, danger, anger, or love," says Fetters. "For instance, on the song 'Zero,' I'm describing a person who calculates the success of her relationships with a spreadsheet. So, I used really harsh and edgy distortion created with a ProCo Rat, and then I put a Boss TR-1 tremolo in sync with the music, panning each eighth-note hit alternately left or right. It has an almost surreal on-off, binary vibe that represents her manipulative nature."

"I wanted to have the acoustic solo on that track really defined," he explains. "So, I double-tracked it using a Godin Multiac nylon-string panned left, and a Taylor 612 CE steel-string panned right. The combination of steel and nylon results in a sort of 'chewy' articulation that I use a lot now. The wide panning also sounds great with rhythm guitar parts."

Fetters took an even more ambitious approach on "I Didn't Know," an acidic look at infidelity.

"There's a mellow stew of guitars on that one," he says. "I used a Kimble Parlor guitar on the quarter-note chord rhythm, and I layered a Danelectro DC-3—which sounds like a vintage Gretsch—through a Wavelength custom amp. I also added a cascade of subtle descending notes with a '65 Rickenbacker 625 through a Fender Cyber-Twin set on 'Super Reverb,' and then doubled those notes with a Fender Nashville Telecaster 12-string. Next, I panned these guitars quite wide in the mix so they can be picked out if you listen carefully. The trick is to define the space of each guitar, and try not to double up on too many of the same frequencies. I rely on my ears—I don't look at meters, knobs, or plug-in graphics to determine the right balance. Trusting your ears and your intuition is usually the best way to go."