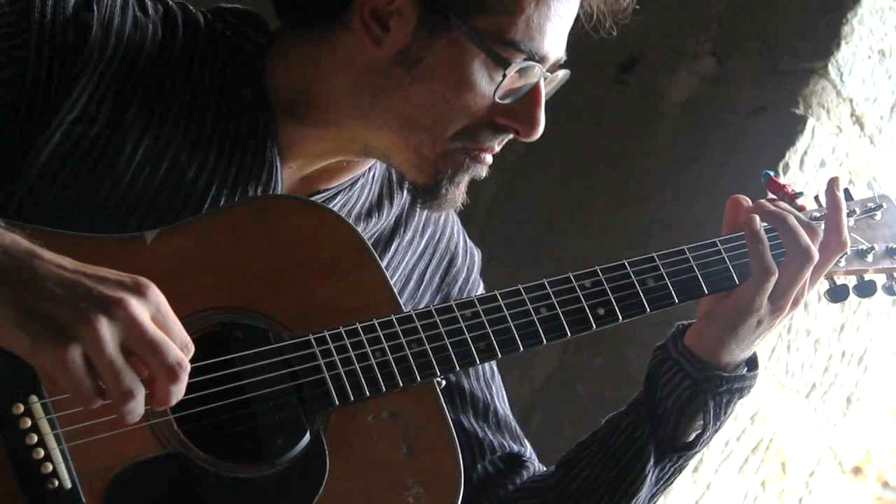 Italian steel-string acoustic guitar virtuoso Pino Forastiere doesn’t mind if people point out the stylistic similarities between his work and that of late guitar innovator Michael Hedges. In fact, if it wasn’t for encountering Hedges’ music right after graduating from the Conservatory of Rome in 1993, Forastiere would have continued his pursuit of a career performing on the classical nylon 10-string guitar instead. Like Hedges, Forastiere employs a dazzling blend of slapping, tapping, strumming, altered tunings and harmonics. However, he also combines those elements with classical phrasing and a focus on distinct and addictive melodies. His approach is captured on his second solo guitar CD Circolare, recorded entirely on a 1957 Martin D28 with no overdubs.

It usually begins with an intuition generated by sounds, images, or readings I encounter, or simply my mood at the time. In the first phase, it's as if I am opening a parallel world containing unique stories represented by my music. Sometimes the stories are immediately clear and a composition emerges that is fluid from beginning to end. Other times it's not as easy, and sonic elements emerge that need to be organized into a composition over a longer period of time. The process can take two hours or two months. When writing, I also embrace the idea that very different musical ideas can share the same space. There are many pieces of mine where minimalism is mixed up with jazz, blues, rock, and popular music. In addition, when writing for Circolare, I tried to forget that I was going to play everything with just one guitar. Music is more important than the instrument to me. I think it's vital to be able to look at a guitar with a certain detachment when using it for composition.

What tools do you use when writing?

I studied formal composition, so I usually prefer to simply use pen and paper. In fact, I am faster with a pen than with sophisticated computer software. I also like the imperfections of handwriting. For me, handwriting creates a gestural memory that helps me a lot when I'm writing, especially when I get back to work on a piece after a long time.

Is there an Italian sensibility at work when you compose?

Definitely. The Italian sensibility is a very strong melodic attitude that finds its origin in the history of my country's music. Gesualdo da Venosa's madrigals and Giacomo Puccini's arias are two great examples of an extraordinary tendency to focus on canto and melody. It's an influence I can't disregard. I have never loved the binary rhythms of Italian music because they are boring to me, but the melodic element is a source of never-ending inspiration.

How has Michael Hedges' work affected your evolution as a composer?

Michael made me understand the great potential of the acoustic guitar. His sound, revolutionary technical innovations, and coherence as a composer are what impacted me the most. Michael demonstrated that there are no limits to the creative possibilities of the guitar. Therefore, imitating him means stopping at the same point he arrived at years ago. I think getting into his music without visualizing his fingers on the fingerboard is a good way to love and respect him. The best approach is to absorb his spirit and use it to inspire oneself to move forward and make new discoveries.