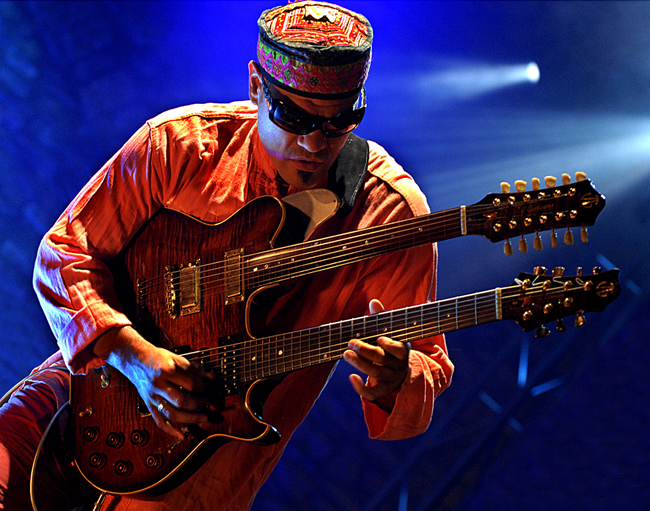 Everyone pays homage to the dead Hendrix, but I'm out to pay homage to a living Hendrix," says fretless and microtonal guitarist David "Fuze" Fiuczynski when discussing his latest CD, KiF Express. "I played with the Moroccan musician contingent at the World's Fair in Seville, Spain in 1992, and spent ten days rehearsing in Marrakesh. Lots of people came up to me there to let me know that Hendrix once visited Morocco. That sowed a musical seed for me. Who knows? If Hendrix was still alive, he might be kicking it in Casablanca and rocking the Casbah. So, the idea on KiF Express is to combine Eastern or Eastern-inflected melodies drawn from Arabic, Indian, and Chinese music with riffs, jazz harmony, microtonal harmony, and Western rhythms."

Going the microtonal route was propelled by Fiuczynski's desire to explore new sounds based on the many Eastern musics that have caught his ear over the last 20 years. He determined the only way to infuse the essence of those musical worlds into his own work was to integrate some of their structural components.

"In Western music, microtones represent all intervals in between the semitones of the 12-note-per-octave system," explains Fiuczynski. "However, there is a lot of music that uses notes between the cracks. And in many world musics, the grid is much smaller. Turkish music roughly operates on nine notes per whole tone, and Arabic music roughly uses quartertones with 24 notes per octave. The best way to talk about microtones is by looking at the blues. Blues players will milk the area between the minor 3rd and the major 3rd. The notes between the 4th and sharp 4th, and the 6th and flat 7th, tend to be what are referred to as 'blue' notes. You don't find those notes, or microtones, on a piano. You can think of microtones within Arabic or older Chinese music as being Eastern blue notes which are really beautiful and affect me in the same way the blues do."

One guitar he relies on is the Fuzeblaster, designed by Johan Gustavsson and Matte Henderson. The upper neck is a 12-string, short-scale 18" fretless oud with Seymour Duncan Antiquity Mini-Humbucker pickups. The lower neck is a 7-string guitar featuring a 6-string tremolo and a fixed low-B string, and is equipped with Seymour Duncan JB bridge and '59 neck pickups, as well as a DiMarzio single-coil middle pickup. The necks and body are made of korina, with a red maple top.

Fiuczynski also has a First Act FuZilla Korina doubleneck, with both the fretless and fretted necks featuring a fat "C" profile, rosewood fretboard, and an 18" scale. The FuZilla uses two Kent Armstrong humbuckers set flush below each neck. In addition, he plays a Campbell American doubleneck FuZix guitar with a 21" fretless guitar on top and a 25w" fretted guitar with a Kahler tremolo on the bottom. Each guitar has Seymour Duncan SH-1 neck and bridge pickups, with the fretted guitar also having a Seymour Duncan STR-1 middle pickup. The FuZix's body is made of sapele, with a rock maple neck and rosewood fretboards. 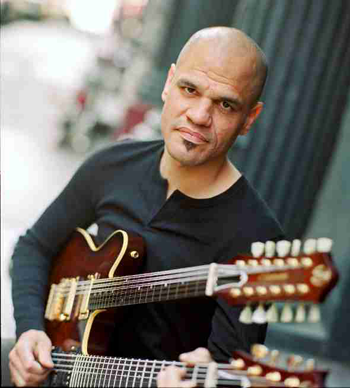 "I used to bring both a fretless and fretted instrument to gigs, but I couldn't switch guitars fast enough in order to use both effectively within the same tune," says Fiuczynski. "I used to do chords on the fretted and lead stuff on the fretless, and I came to the conclusion that if I had both on one instrument I could really play. Now, I have the best of both worlds."

Fiuczynski got into fretless playing in the early '90s, when he first delved into adapting Arabic music for guitar. He started by defretting a guitar to approach the Eastern microtones, but also discovered other benefits.

"When you play fretless, you get a really nice mellow tone playing with the finger pads of your fretting hand, and if you play with your nail, you get a much harder sound with more sustain," explains Fiuczynski. "It's like the difference between electric and acoustic. And when I put some distortion on it, suddenly, it's like a blues slide. But unlike a slide, you have four fingers available and your hands can play anything."

Fretless guitar requires exact positioning of the fretting hand and significant ear training skills to identify the tiny intonation differences the instrument enables. Fiuczynski relies on fret lines to ensure he's getting what he needs out of his guitars.

"When you're talking about 72 notes per octave, that's six notes between each fret, and it's not enough to just slam your finger in between the frets to get a quartertone," says Fiuczynski. "I need fret lines to help me achieve the discipline to accurately nail those notes. A lot of people are turned off by microtonal theory, but it really is more about the feeling. There is discipline in having to play scales until your fingers find the right notes, but ultimately success lies in how you dig in to get that searing, soaring feeling exactly where and when you want it."

The guitarist initially went with a low seventh string on his Fuzeblaster to create low-end crunch chords for Screaming Headless Torsos.

"The advantages of having the seventh string are that you can retune it from B to A to have fifths and power chords that you can play with just one finger, and you can play power chord passages much faster," says Fiuczynski. "The seventh string is also useful for drone-based Eastern music. With six strings, if you want to use one string as a drone, you have to detune it, and then the whole guitar is completely out of tune. If you use a thinner seventh string, you can tune that one string for a drone effect, and have the other six strings available in whatever tuning you want."

"My basic volume, distortion, and delay pedals setup has remained intact for 20 years," says Fiuczynski. "What's new is using the Pickup Booster to get much cleaner lead sounds. In terms of the microtonal aspects of my playing, overdrive helps me get a thicker, richer sound. I also use overdrive for the Indian slide stuff, which makes for a really cool lead sitar sound. It's what Ravi Shankar might sound like if he used effects."

"Global microjams" is a term Fiuczynski coined to represent the next frontier he plans on taking his microtonal and fretless work into.

"The concept is to take microtonal harmony and ethnic folk melodies and have them organized in a jazz-groove context that uses new rhythms and beats," says Fiuczynski. "The goal is to have three different elements in a context that hasn't been heard before, so fresh harmonic and counterpoint possibilities emerge. For instance, with John McLaughlin's Mahavishnu Orchestra, he had jazz-rock, which Miles Davis had done previously, and he had Indian rhythms to organize the tunes, which also was done earlier. However, he combined them, along with a lot of slash chords from Western classical music, and it was a brand new thing. So, with global microjams, the idea is to produce a feeling of something new in which the whole is greater than the sum of its parts."

Fiuczynski is well aware he's going down the road less traveled. It's his hope more guitarists will come along for the ride.

"Everybody complains that everything that can be done has been done in the art world," says Fiuczynski. "Well, with fretless guitars and microtonal music, the slate is totally clean in terms of using them within jazz, rock, and pop. You can be Captain Kirk and go where no one's gone before."