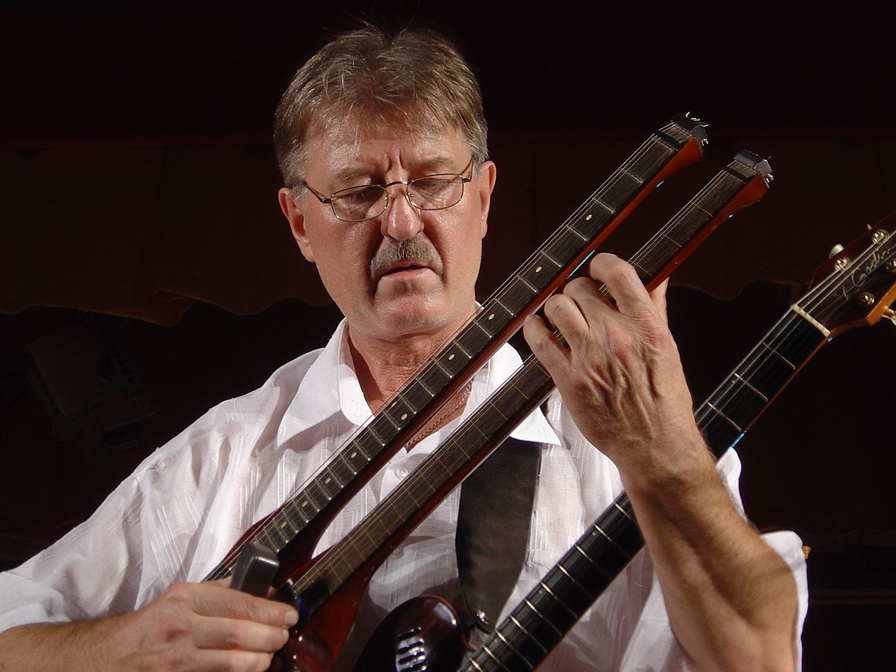 The electric guitar has no boundaries for Enver Izmaylov. The virtuoso musician of Crimean Tatar heritage, a Turkic ethnic group residing in Crimea, located on the northern coast of the Black Sea, is a legendary performer in Ukraine and Russia. He's renowned for using his dazzling tapping technique to bridge jazz, pop and classical influences with Crimean Tatar, Balkan and Turkish folk music.

Izmaylov has a deep discography focusing on solo guitar recordings, and intimate duo and trio efforts featuring players including flautist/saxophonist Geoff Warren and percussion master Burhan Ocal. His latest release, River of Time, is an ambitious, bigger production that combines his guitar approach and multi-genre focus with a world of effusive, percolating rhythms, and even a healthy dose of driving rock.

Tell me about the concept behind River of Time.

It represents my desire to showcase the capabilities of the guitar as something that can reflect the music of different nations. My interest in uniting Eastern, Asian and Western sounds is inspired by my love for the cuisines of these regions. The album focuses on modern jazz-rock arrangements featuring straight electric guitar, as well as guitar with a variety of effects.

What appeals to you about focusing on tapping?

I’ve been playing guitar since I was 14. I played a lot of `70s jazz, rock, pop, and folk music using traditional techniques, and then God suggested the idea of my tapping style, which I developed through a lot of hard work. With my technique, I can play bass, solo and accompaniment simultaneously on the neck. It’s a piano-like approach that offers limitless technical and sonic opportunities as a performer and a composer.

What alternate tunings do you use?

The Crimean Tatars’ music is very rich. It is very multi-tonal and polyrhythmic with time signatures including 5/8, 7/8, 9/8, 11/8, and 13/8. The music is also deeply philosophical and reflects epochs going back to ancient times. There are similarities to the music of countries of the Balkan Peninsula, including Bulgaria, Yugoslavia, Romania, and Turkey. It can be lively and merry, as well as melancholic.

My main guitars are a Godin Multiac Jazz and Yamaha SG-2000. The Godin has a silverleaf maple neck, ebony fretboard, a silverleaf maple center with poplar wings, a Godin GJN1 humbucking pickup, and a connector that lets me control my Roland GR-20 guitar synth, which I use for things like sitar sounds. The Yamaha has an ebony fretboard, maple/mahogany neck, arched maple top, mahogany back, and two Alnico V SGH-1SOB humbuckers. In addition, I use the Roland VG-99 V-Guitar multi-effects processor. From there, I go into my Laney Lionheart L20T410 combo amplifier. I'll also use my Kustom DE200 bass amplifier if I want to create a heavy bass sound.

What can you tell me about the recording setup for the new album?

I recorded my performances at home, in s separate room from the other musicians. My guitars were recorded through a Yamaha mixer connected to Steinberg Nuendo audio production software. I performed overdubs on some pieces when necessary.

You also have a custom triple-neck guitar. Describe it for me.

It was created by several master luthiers from Kiev in Ukraine: Sergey Krolichenkoy, Aleksey Vasilets, Igor Tsishkovsky, and Vladimir Radchenko. It’s called the Avax Enver-Travel and it combines three separate guitars, each with its own output, and equipped with special locks that allow me to fit them together in any sequence I desire. I named each guitar after my family, including my wife Mevide, and my daughters Gulmira and Leniye. The instrument consists of a fretted, headless guitar with a maple/bubinga neck, a wenge fingerboard, a sapele body, a Seymour Duncan Mini humbucker on the neck, and a DiMarzio Air Zone in the bridge. The second guitar is another fretted, headless guitar with maple/bubinga net, walnut fingerboard, sapele body, and Ibanez pickups. Both of these guitars are very Steinberger-like. The third guitar is an ordinary 4-string bass with a rosewood fingerboard and a P-Bass pickup. The ability to use my tapping technique across these different-sounding instruments lets me create and perform some really interesting and colorful compositions.

What inspired you to cover Deep Purple’s “Smoke on the Water” together with your vocalist daughter Leniye Izmaylov on her Traveling by Crimea CD?

In my youth, I really liked Deep Purple and played their music a lot. I wanted to reassess my view of “Smoke of the Water” by using tapping to play it. My hope is that we brought something new to it and didn’t mar that great composition. What I like about the tune is that it’s accessible and appealing to all guitarists regardless of age, skin color, and religion. 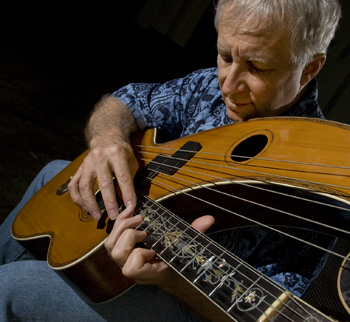 John Stropes is the Director of Guitar Studies at the University of Wisconsin-Milwaukee, Peck School of the Arts. He is widely acknowledged as one of the world’s leading authorities on fingerstyle guitar.

"Without a doubt, Enver Izmailov has stepped forward with a refreshing new synthesis of characteristics that make his technique, performance, and stage persona immediately appealing. At a time when there seems to be a premium for bringing in music of other cultures, Enver comes by this naturally. His colorful manner and his folk soul are a charming combination. With his own Tatar heritage, and having lived in the multicultural environments of Uzbekistan and Ukraine, he is able to perform metrically-sophisticated music with style. And he does it with a two-hands-on-the-fingerboard approach that seems natural.

"We owe a lot to Harry D’Armond, who developed the first commercially-available, attachable guitar pickup in the mid-1930s and began the exploration of two-hands-on-the-fingerboard technique. While many players have given it a whirl, Enver’s approach is distinctive. When he relocated to Ukraine after the collapse of the Soviet Union, he had the luxury of having the time to develop his two-hands-on-the-fingerboard approach and its application to the music of all the national groups. He had time to explore and to integrate. Technically, his two-hands-on-the-fingerboard approach emphasizes the hammer on: the sound he wants is produced when his fingers, left- or right-hand, hit the strings.  As a result, there is a little more edge on the front of each note and a separation between consecutive notes.

"Enver’s music has truly captivated both electric and acoustic guitarists, including players of all styles."