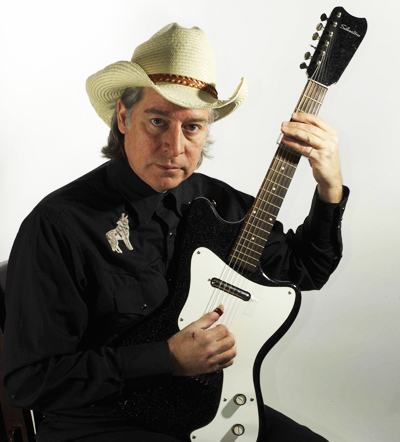 Richard Leo Johnson’s obsession with the owner of a 1930s National Duolian steel guitar is the inspiration behind his fascinating new CD The Legend of Vernon McAlister. After a neighbor gave him the guitar inscribed with the album’s namesake, Johnson undertook a comprehensive search to locate any information about the man. The detective work proved fruitless, but left him motivated to write a mythical tale in music and words about McAlister, who he imagined to be an eccentric, nomadic musician whose first priority was creating abstract solo guitar music.

“The less I knew about McAlister, the more intriguing he became,” explains Johnson. “I came up with idea of the myth and decided to create accompanying music exclusively on the Duolian in a totally spontaneous manner. I would start by tuning the guitar to a tuning I was completely unfamiliar with and just start improvising. All the while, I was thinking about how anything I was playing might fit into a sonic story line that could define moods, transitions in a person’s life, and the various emotional aspects of the human condition in an interesting way. I captured everything on a cassette recorder and at the end had 17 tapes of raw material to sift through in order to create the final recordings.”

A key part of the creative journey involved using myriad techniques to coax unique sounds out of the Duolian, which he often uses as background textures on the album.

“If I was speaking on the phone or something dropped on the floor or a dog barked, the instrument would respond with really interesting frequencies,” says Johnson. “That encouraged me to experiment. I pounded hard on the guitar with a wooden mallet. I used spoons, knives, and my fingernails to scratch against the instrument. I put a wooden dowel under the strings at the fifth fret and took a cello bow and scratched up and down on the dowel which made a really frightening sound. I loosened the strings to the point where they were rattling. I used an Ebow which made the guitar sound like a human voice. I was even blowing on the strings which sounded just like the wind because of the echo chamber-like sonics of the instrument.”

Johnson also chose to encourage fresh musical thinking by retreating from his hallmark jaw-dropping thumbpicking-based approach and playing exclusively with his fingers.

“I wanted to get away from my crazy fast stuff and overall familiarity with the instrument,” says Johnson. “I wanted to relearn it to a certain extent by approaching it with a diminishing level of technique. I thought this guitar had something special to say, so I wanted to leave myself open to whatever that might be by being respectful of it and taking a heart and soul approach, rather than favoring any technical considerations. I think it also has to do with my current interest in making interesting guitar recordings that people listen to without specifically noticing the guitar. When people hear my records, I want them to say ‘That made me feel good and I enjoyed it’ or ‘That’s something I want to hear over and over again’ rather than ‘Wow, how did you do that?’”