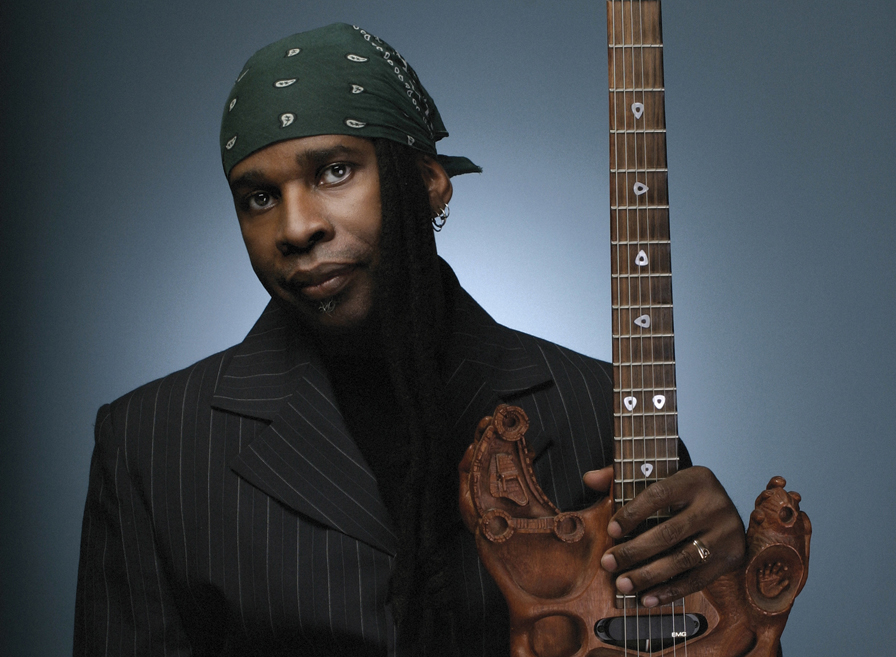 Vernon Reid’s career is dominated by an unceasing drive to break down the walls that divide styles, genres, and people. He’s best known as the founder and lead guitarist of Living Colour, the politically incendiary, multi-platinum African-American hard rock quartet. Since its inception in 1984, the group has infused the scene with a healthy dose of reality. Its songs often explore social inequality and injustices communicated through a funk-, jazz- and hip-hop-soaked musical perspective that has influenced countless acts. Outside of the band, Reid is equally, if not more eclectic, having incorporated his blazing, razor-edged solos and expansive compositions into collaborations with the likes of Bill Frisell, DJ Logic, Public Enemy, Carlos Santana, and David Torn. His new CD Other True Self, recorded with his band Masque, represents the sum of his varied interests. The tour de force combines avant-garde, jazz-rock, and world music influences with a healthy dose of fiery soloing into a cohesive, exhilarating whole.

Other True Self has an unabashed modern fusion vibe to it. Describe how the genre informs your approach on the disc.

Fusion has become a dirty, dusty, foul word that people try to avoid, but it hasn’t gone away. There are fusion artists that have become narrow in their focus and something of the fire has gone out of the genre, but when I think of it, I look to the classic fusion era of the late ’60s and early ‘70s. One of my key reference points is Mahavishnu Orchestra’s Inner Mounting Flame. When it came out in 1971, it was the jazz equivalent of Never Mind The Bollocks, Here's The Sex Pistols. It was really raw and unlike anything else I’d heard. John McLaughlin, along with other innovators of that period like Miles Davis, Billy Cobham, and Tony Williams represent the inspiration behind Other True Self. The tracks “Game is Rigged” and “Afrerika” are examples of pieces that specifically draw from that realm. However, I take an additive approach, not an imitative one. There are lots of elements working together on the record, including African, reggae, and Middle Eastern influences.

Provide some insight into your writing process.

It revolves around little tidbits of music that come to me at the most bizarre times. I try to always have a small tape recorder around that I can whistle, hum, or sing musical and lyrical ideas into. When I set aside time to actually play the ideas, I’ll pick up the guitar and often develop a series of chords based on those tidbits and go from there. Sometimes when the inspiration is a lyric, I find it doesn’t always pan out, but the melody is fine and a piece can shift from being a song for Living Colour into an instrumental for a solo project. Occasionally, things come to me fully formed. I’ll start fingerpicking and one thing just leads to another and the composition is pretty much done. Idiomatic concerns are also part of the creative process. For instance, if something is developing with a blues feel, it will dictate that I follow a particular style. Do I follow it or not? That’s the big question. Typically, I find I have more latitude when I choose to go beyond the idea of making genre-specific statements.

How else do you shake yourself out of any routines or patterns you fall into when writing?

I try to challenge myself to move beyond my comfort zone. That takes the form of asking myself if something I’ve done is tried and true or rote. It’s true that there’s a certain satisfaction you get from executing what feels like a familiar, pure rock lick, but I get even more satisfaction when I’ve moved beyond that point into uncharted territory and found a way to more fully express what I’m working on. One way I try to move out of the comfort zone is to play things on different parts of the neck. Something that feels good and secure in one octave may not feel as secure in the octave below or above. So, I tend to try things all over the place in order to break through an impasse. I also interpolate by taking phrases and applying them further up a particular scale in varying degrees. I keep the intervallic relationships, but as I go up the scale, the notes change because the relationships change within the phrase and that forces me to rethink how a piece is developing.

How have you evolved as a guitarist since the dawn of Living Colour?

I think I pay more attention to the entire neck now and am less focused on specific phrasings or approaches. Take two-handed tapping for example. It’s fallen into the background sometimes for me. I can get through a whole gig and not do it once anymore. It’s less important to me to play fast even though that’s one of the things I do. I enjoy the visceral joy and excitement that comes from playing fast, but I’m trying to go beyond the virtuoso idea that states “this is a shred record and therefore everything on this album will reveal a particular technique” or “here’s where I play the impossible thing you can’t play.” I’m also more focused on pursuing new techniques such as the claw-like one I’m currently working on in which I’ll hold the pick with my thumb and forefinger, and then with my middle finger, I’ll play a pattern on an adjacent string. It’s somewhat similar to a banjo technique. It enables me to create very wide interval skips in that I can play the adjacent string, as well as alternate between skipping and playing it. I can also use the technique to fill in minor sevenths and elevenths into my phrasing.  It’s something I stumbled on by accident and found it really fascinating.

What drives you to keep pushing the creative envelope?

It’s the need to try and make a real connection to the moment through music. It’s something that happens infrequently, but the possibility of it happening is something that really motivates me to move forward. What’s funny is that my desire for that transcendent moment is an obstacle to achieving it. It’s like my desire to be cool is a barrier to being cool or my need to be charming means that I will act like a dope. It’s a dance with desire. Having great technique and practicing a lot only gets you so far. You can go out and play flawlessly and dazzle an audience, yet all the participants may not have been engaged in anything real. You played a wow thing, the audience came to see a wow thing, got what it came for, and you go on to the next day and do it again. I’m not at all interested in that canned approach. And the fact is sometimes the connection to the moment doesn’t happen onstage. There are times when something didn’t work onstage and I say “Man, you should have heard me in the hotel or dressing room!” [laughs] I could also have had a weird, fretful day and not had time to practice, get onstage, and somehow everything clicks. Suddenly, there’s no past or future. There’s only the now and everything feels just right. I’m also okay if when it’s happening, the audience hates it. But when everyone has a good time, that’s awesome. That’s the best situation a musician can be in.