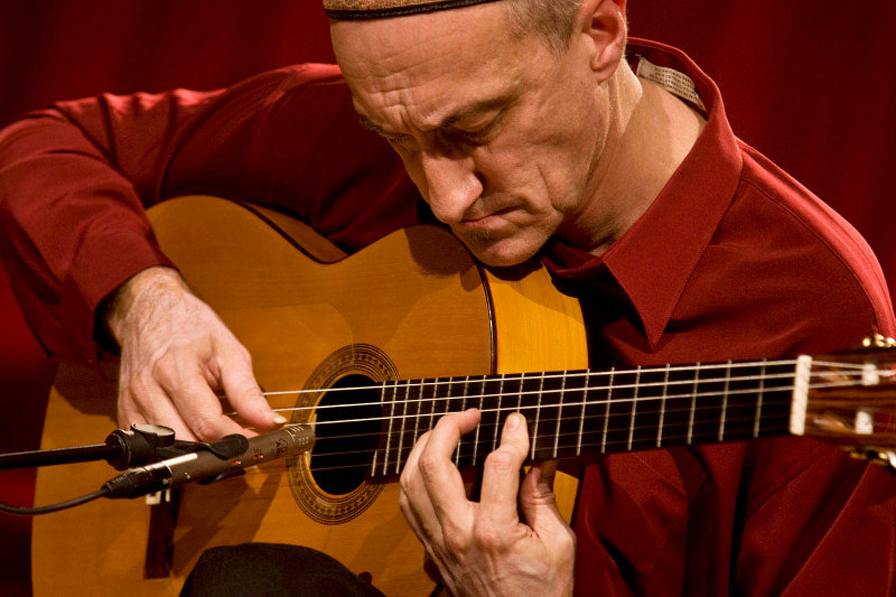 Miroslav Tadic’s reputation as one of the world’s most intriguing, eclectic, and diverse guitar voices has landed him gigs with the likes of Jack Bruce, Terry Riley, and David Torn. His prolific solo career, both in acoustic and electric realms, has also found him exploring contexts as diverse as traditional Eastern European music, North Indian classical music, jazz, rock, and avant-garde spheres. But it's the music of Macedonia that is closest to his heart, as evidenced on his acoustic guitar duo albums with Macedonian superstar musician Vlatko Stefanovski. Both 1999’s Krushevo and their new release Treta Majka offer a fresh and vibrant take on traditional Macedonian compositions.

Describe the basics of Macedonian music.

Macedonia is at the crossroads between Europe and the Middle East. It has had a lot of musical influences over the centuries coming from places like India through the gypsies and Turkey, stemming from that country's occupation of Macedonia during the 14th century. The music also has European elements, such as the use of regular harmony alongside the modal music of India and Turkey. That translates into interesting metric structures. For instance, there is a lot of music in 7/8, 5/8, and 11/8. Sound-wise, the music has some similarities to Klezmer and flamenco. It also has an incredible emotional depth and beauty.

What appealed to you about presenting the music in a modern context?

We have been listening to this music since we were kids, so we have a strong emotional connection. Also, to our knowledge, nobody ever adapted the music for two guitars before us. We approach it with the greatest respect, but also bring it into the realm of our other influences. I infuse classical music, jazz, and Brazilian elements and Vlatko integrates his take on rock, jazz, and blues. We want to give the music a chance to find new audiences.

How do you and Stefanovski go about adapting the music?

Traditional Macedonian tunes are typically played on instruments including bass, accordion, clarinet, and violin. Vlatko and I take on all of those roles. For example, if Vlatko is playing melodically and taking the clarinet role, I may take the accordion and bass role, or the violin chord and double the melody in thirds or play it in octaves. The idea is to suggest the sound of those instruments.

What guitars did you use on Treta Majka?

I used a traditional flamenco guitar made by Manuel Bellido of Granada, Spain and a classical baritone guitar custom-made by Sabmar Guitars of Belgrade, Serbia. I feel very close to both and use them for all of my acoustic playing. The Bellido is a very light and highly responsive instrument, with a bit of "dirt" in the tone, but I can also manage  to get really subtle, dark and beautiful sounds from it. It has very good action, which makes left hand work easier. The Sabmar classical baritone is simply one of the best and most inspiring instruments I've ever played. It has amazing depth and richness of tone in all registers.

How did you record your guitars?

We recorded directly to hard disk at 24 bit/96 KHz using Cubase VST 5.5.1 at Vlatko’s home studio in Macedonia. It’s a medium-size room with high ceilings, without baffles. We used a pair of mics on each guitar which were about two feet away. The Rode NT1000 pointed between the soundhole and the bridge and the Oktava MC-012 pointed roughly at the twelfth fret. But the most important things are a good instrument, players that are well prepared, and great music. Everything else is secondary.