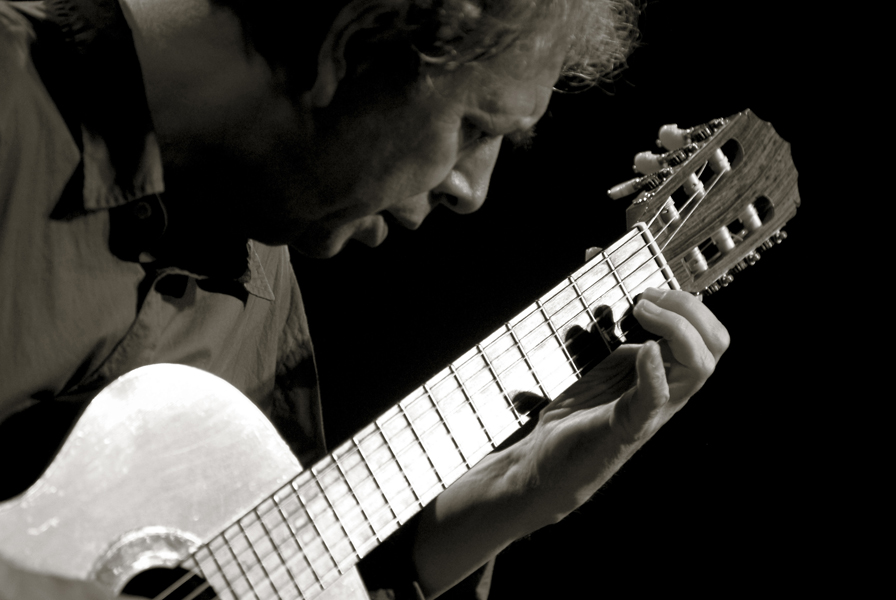 Ralph Towner is globally renowned as a classical and 12-string guitar virtuoso, but he would rather be known as an aural novelist. His compositional bent leans towards narratives that communicate distinct points of view, purpose, dialogue, and movement. His new solo guitar CD Time Line is a testament to that approach. Its 12 pieces explore a diverse palette ranging from the slow-burning balladry of “Always By Your Side” to the haunting, yet fiery “The Hollows” to the emotionally mercurial vignettes comprising the “Five Glimpses” suite. Several of the album’s tunes are transcribed in his new book Solo Guitar Works Volume 2.

Time Line possesses an earthy feel that resulted from Towner breaking free from stoic studio environments. The disc was made in a church located in the Austrian mountain monastery of St. Gerold. The natural ambience of the church lends the album a distinctly open and airy feel similar to a live recording.

The album is Towner’s fifth solo guitar release in a vast catalog of more than 20 titles stretching across nearly four decades on the ECM label. His other discs typically favor quartet, trio, and duo formations featuring jazz luminaries such as guitarist John Abercrombie, drummer Jack DeJohnette, and bassists Gary Peacock and Eberhard Weber.

In addition to his voluminous solo output, Towner is the principal composer, guitarist, and keyboardist for Oregon, a pioneering, boundary-breaking act known for merging world music, jazz, and classical elements. Together with reedman Paul McCandless, bassist Glen Moore, and percussionist Mark Walker, the group remains a vital force in creating unity between diverse influences more than 35 years and 26 albums since forming. Its latest CD Prime offers some of the band’s strongest material in years, including the gorgeous epic “Monterey Suite.”

Why did you choose to record Time Line in a church?

Manfred Eicher, who runs ECM and produced the record, has recorded a lot of classical works there. He really likes the sound and wanted this record to have more of a classical atmosphere. The room was very large and capable of seating 300 people. It was quite dark and a little cold. There was no-one in the church but me and a bunch of microphones. The control room was elsewhere, so Manfred and the engineer were only able to see me through a television camera. I couldn't see anyone, so it was like performing a concert in a huge space all by myself. Recording in a church is dissimilar from the perfect, silent confines of a studio. The room's ambient sound and natural reverberation affected me quite a bit. I had a natural instinct to project a little further. It's also important to note that I wasn't wearing headphones during the sessions. When you use headphones, everything is compressed. When you play softer, it still sounds very loud, so you don't hear the same proportions of sound you hear without the electronic boost from the headphones. By not using headphones, I was able to pay more attention to the guitar's details and dynamics, particularly between the fortissimo and triple piano. In addition, I think not using headphones heightens the emotional elements of the music.

Describe the recording set-up you used.

We always use two different stereo pairs of mics, with one set on the left side at eye level, a couple of feet away from me and the other set on the right side, a bit lower, the same distance away. We also use another ambient mic that’s quite high-up and centered at long distance, and one in the back of the church as well. We mix between the mics, rather than do a lot of equalization. We avoid EQ because if you make a good enough sound on the instrument, you don’t need to meddle with it. When you use equalization, you can usually hear where something is boosted or cut at certain registers. For us, the best solution is keeping things very live-sounding by boosting and lowering the levels between the different high-end Sony and Schoeps mics we used. We recorded directly to Pro Tools and entire session took about four hours. We didn’t do any punching in or make corrections. Before I went in, I thought “Oh boy, I’m not going to have a chance to fix anything.” I was lucky sometimes to have two or three takes in case I covered something in one take I missed in another. That’s the way ECM always works. You accept what you play and realize it represents who you are as a musician. There’s not a lot of time spent making decisions, retracing steps, or perfecting things to the point where you strangle spontaneity. You live with the results. It’s a very natural experience and you sometimes have to swallow your pride. 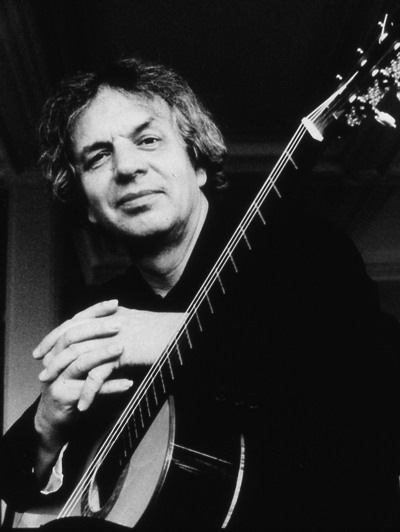 What guitars did you use on the record?

I used a classical guitar by Jeffrey Elliott and Cynthia Burton that I’ve had for eight years and my old Guild 12-string which the company built for me back in 1972. What appeals to me in an ideal guitar is warmth, a lot of mid-range, and a not-too-bright sound. In the case of the Elliot-Burton guitar, I like the fact that it is very clear and really even. All the notes respond exactly the same way across the fingerboard which is unusual. It’s really desirable because you know exactly what you’re getting when you play. It has a combination of Germanic clarity and Spanish warmth. I really love the guitar. The Guild I like because it always has a very strong sound. Twelve-string guitars typically aren’t that loud because of the tension and the fact that fretboard needs to be thicker to support all the tension.

You’re not a fan of using pickups on classical guitars. Why?

I think one of the keys to mastering the instrument is being able to create a sense of sustain through the way you play it. You can use secondary notes and voices and have them tail off in volume to give more prominence to the note you want to sustain longer. It involves a lot of control over your dynamics, secondary voices, and passing tones. When you add a pickup, it tends to make everything sound the same volume, even when you play more quietly. The sound tends to sustain in an almost electric fashion more than it does when you hear the instrument through a mic. I’m not as fussy about the 12-string. In concert, I’ll use a Fishman pickup on it so I don’t have to pound on it so hard, but I’ll mix the signal with my old Beyer M1-60 double ribbon mic that has a very flat response. The combination gives the instrument a lot of power in a live setting.

You employ classical guitar technique with an emphasis on the free stroke over the rest stroke. Tell me about that preference.

I don’t use the rest stroke as often as most because I’ve developed quite a loud free stroke and don’t hit the next string when I use it. I can play at the same volume as a rest stroke with the same quality of tone. Basically, the free stroke prevents me from getting tangled up. It more easily enables me to articulate a staccato thing and work with different note lengths by stopping the note with the next finger I’m alternating with. I think it’s unusual that I manage to employ the same classical technique on the 12-string, so you’ll hear me play these real unisons with four-or-five note chords, rather than just strummed chords on it. To achieve that, I’ll also use my little finger on my right hand. It’s very similar to a keyboard sound and technique. I’m also a piano player and that similarity is what drew me to the classical guitar in the first place. In terms of plucking, I always use my nails, even on the 12-string. For me, the nail offers a very clear tone. However, before my nail hits the string, the edge of my finger touches the string first, so you don’t hear the “clack” of the nail hitting a moving string.

Provide some insight into your creative process.

What I do is almost all composition-based. I’ll sit and play and eventually stumble across something that is recognizable as an idea as opposed to just being a nice sound. When I find the kernel of an idea, it projects itself with a unique identity and jumps out. As I proceed, the idea builds and builds. When things are going well, the piece tends to take on a character that almost demands that it does this or that. I write everything at once. I start with the melody and then the chords, but everything is inseparable and shaded by the harmony. When I hit a wall and start asking myself “Where do I go from here?” I’ll get up and walk around and wait until I hear the next step materialize in my head. Alternately, I’ll just leave the piece alone for awhile. Sometimes, if you play something too much, you play yourself into a semi-deaf state in which everything sounds the same. It’s also good to get away from your instrument and leave it alone for awhile. I usually capture music with pen and paper, but once I get deep into the process, I play the piece into a computer using Finale. I play things into it one note at a time, rather than playing the whole piece. Computers aren’t accurate enough about representing how long a note is held, small passing tones, or when there are a lot of different time values stacked up.

How do you go about telling stories with your compositions?

Writing a good piece is almost like writing a novel. There needs to be a logic to it. You can’t just have a piece sit there, sound pretty, and then have it be over. There is often a conflict and resolution within my pieces. There can also be a psychological or subconscious plot going on in terms of how the intensities vary. The interesting thing about music is that you can write so a piece has all of the elements of a literary story without literary meaning. As a writer, you have access to the same emotional subtleties. There has to be development and you’re always holding off some type of arrival. You can use deceptive cadences to indicate you’re arriving at something, when in fact you’re arriving somewhere else which can be depicted with interesting modulations. All of these subtleties get interpreted by the listener as emotional events. You’re creating expectations. Listeners get very bored very quickly if there isn’t that development going on in your playing.

You’ve said one of your key goals as a musician is to transcend your instrument. Elaborate on that.

A great example of that is Miles Davis. When you listen to his music, you never say “That Miles Davis is such a good trumpet player.” That’s because when you hear his music, it puts you in a difference space. He was a master storyteller. The distinct atmospheres he created ensured you’re never worried about whether or not he could play the trumpet. Rather, you’re thinking about the feelings the music is conjuring up. So, my goal is to play the instrument well enough so people pay attention to the music and forget about the fact that they are listening to a guitar. When people are too conscious of what a good guitar player you or how clever you are, it puts things into the realm of a circus for me. Your cleverness should be used to make people be non-judgmental about the instrument and how it’s played, and become swept away by the story you’re telling.