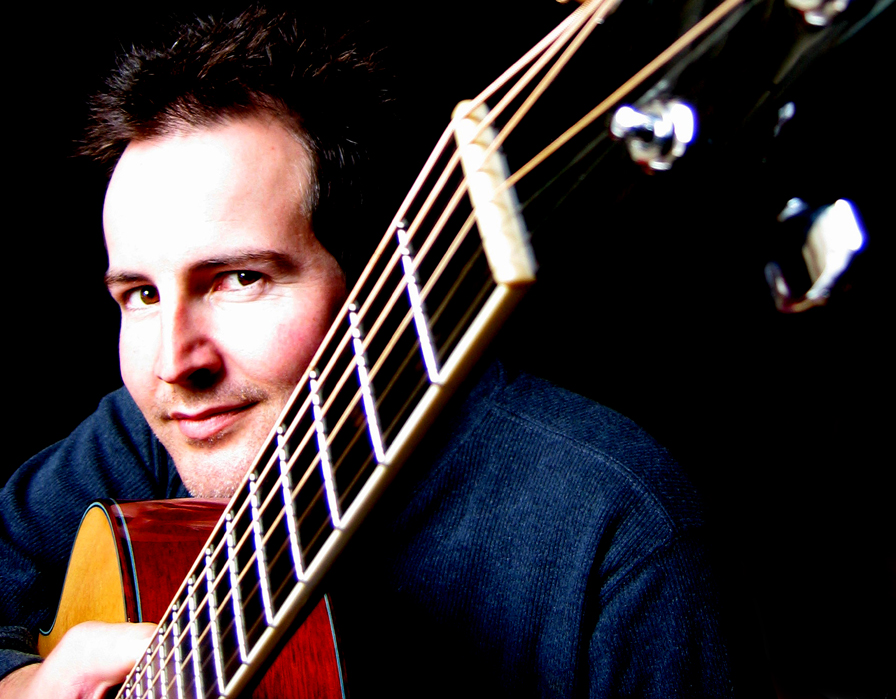 The essential element of a solo acoustic guitar piece for me is that it must be evocative,” explains Canadian fingerstylist Art Turner. “I admire guitarists who can put on a bear suit and do backflips on a motorcycle, but musically, they bore the hell out of me. You need to have a certain amount of technique to pursue something that’s rhythmically or melodically interesting, but I think it’s key to direct it into something that works as a composition and tells a story with a beginning and an ending that makes sense for the tune.”

The steel-string guitarist puts his money where his mouth is on his new CD Sonora [Redtail Records]. The disc features solo guitar pieces as well as collaborations with bassist Michael Manring, violinist Hugh Marsh, and cellist Anne Bourne. While the focus is on his exquisite picking, Turner employs a wide range of techniques, including bending, slapping, two-handed tapping, and banging against the instrument. He also sparingly uses a couple of less common approaches.

“I do something called ‘harmonic scratching’ that I learned from a guitarist named Dean Magraw,” explains Turner. “I scratch on the wound strings with a fingernail and then bend the fretted note, the neck, or the body at the same time. I also really enjoy ‘harmonic stopping,’ in which you stop a ringing harmonic by playing another harmonic. Essentially, it means you’re gently tapping a harmonic on a string that’s already ringing. Both techniques yield some really interesting sounds.”

Turner first took up the instrument at age 31 after careers as a professional photographer and Motocross racer. He focused exclusively on open tunings from the outset.

“I’ve never played anything in a standard tuning,” says Turner. “It began with me listening to a Will Ackerman record that had all the tunings listed. I immediately got out the tuner, started messing around and got turned on by the complex resonances that aren’t possible in standard tuning. I particularly like C, G, C, G, C, D because it’s so low, dark, and resonant. E, B, E, F#, B, E is another tuning I love that I discovered from listening to Alex de Grassi. It’s got that element of visceral darkness too, yet can still be played in a way that’s beautiful and uplifting.”

His main guitars of choice include a Linda Manzer Rosewood/Cedar Cutaway and a custom Art Taylor made from California Redwood Sequoia and Mexican Cocabol.

“The Manzer is the most stunning guitar I’ve ever played,” says Turner. “It has an incredibly liquid high end, a very present midrange, and a very deep, bright and focused low end. Every single note on the instrument rings out with tremendous harmonic complexity and beauty. The Taylor is also a real stunner with its monster low end overtones.”

Turner was determined to ensure every nuance of his sound is revealed to the listener on Sonora. Having the recording mastered properly played a key role in achieving that aim.

“I believe acoustic guitar recordings should resonate with the same kind of impact as if you were sitting three feet in front of the instrument,” says Turner. “Today, mastering a record often means making it as loud as possible and that usually results in overcompressing the signal which can kill the dynamics of the instrument and very likely create distortion in the process. It’s like buying a brand new car and beating it up with a baseball bat on the first day. Everything should start with mic placement to ensure the guitar sounds as good as it possibly can with the least amount of EQ necessary. From there, it’s a matter of taking a subtle compression approach that keeps the dynamics of the signal intact. I use tools like the Renaissance Compressor and L2 Ultramaximizer by Waves that make the process easy. The idea of loud mastering is something that should be left to big label mastering engineers who have all kinds of commercial and radio pressures to contend with. The smaller studio guys should simply try to make the record that sounds best to their ears and leave it at that.”