Twenty-four of the world’s most renowned musicians share incredibly candid, in-depth thoughts on the joy and pain of the creative process, their careers and aspirations, conflicts and collaborations, and the realities of today’s music business in Innerviews: Music Without Borders by Anil Prasad.

The eBook edition hit #1 on iTunes' Arts & Entertainment and Music charts. iTunes also named it a "New and Notable Book." The print book charted in the top 20 music books at Amazon UK, and the top 30 at Amazon US.

The eBook is available as a free download. You can instantly download it in the format of your choice by clicking on these links:

The files are easy to install and should be dragged directly into the Kindle app, iTunes or Acrobat Reader.

The print book is out of print, but copies sometimes turn up on Amazon.

Some of the evocative topics explored in the book include:

Here's what artists have said about the book:

“Anil Prasad is like a great musician. The way he expresses himself through his own art—his writing—causes readers to feel inspired, as if we’ve learned about ourselves, as well as the subject of the interview.”
— Victor Wooten, from the book's foreword

"You might like to check out a book that's causing something of a buzz in musicians' circles. Innerviews: Music Without Borders from Anil Prasad presents some two-dozen interviews with great and interesting players, including myself, and several people I know well and have played with, including Ralph Towner, Jon Anderson and David Torn. Lots of interesting stuff about the art and psychology of music-making. Perfect for those dark and wintry Northern Hemisphere nights."
— Bill Bruford

“Anil Prasad's Innerviews: Music Without Borders, is one of the most fascinating reads on the creative process of some of the most exciting contemporary musicians working today. Those who love individualistic, genre-smashing artists will cherish each and every one of these interviews and perhaps be introduced to new music that they will glad to hear for the first time. In a period when culture seems to be all about reality TV, and fame for doing nothing, a book that exposes and digs into truly creative people, with deep wells of desire to communicate in a highly personal matter, is a light shining in the darkness of the mediocrity that surrounds us today."
— Michael Shrieve

"I'm always glad to read Anil's pieces—consistently among the best interviews out there. He always ask the right things. I'm very grateful to him."
— Mike Keneally

“Anil does splendid interviews with an amazing mix of musicians in Innerviews: Music Without Borders. He takes the artists’ work seriously and meets it on its own terms, which is a sign of true generosity on his part.”
— Vijay Iyer 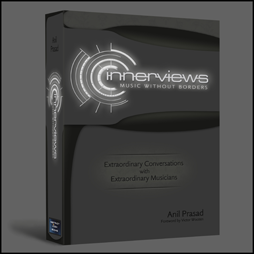